A direct flight from North America to Asia can take you 12 to 15 hours. Spending that amount of time in a great business or first class seat will not just make you feel pampered — it will help you adjust to the time difference easier. Enjoying a good night sleep in a comfortable 180-degree bed helps your body clock adjust despite crossing a dozen time zones.

Business and first class awards from the U.S. to Asia cost:

Even if you hate flying, do yourself a favor and try a long flight to Hong Kong in a first or business class seat on Cathay Pacific – you will be hard-pressed not to enjoy it. The first class cabin has only six open suites, and the business class seats all have access to the aisle. And the food and entertainment choices in both are excellent.

Cathay Pacific first class seats are notoriously hard to get, but business class awards are quite accessible. All you need to do is book well ahead – like 10-12 months – and you stand a good chance of getting what you want. You can’t search for Cathay Pacific awards on the AA website, but you can search on the British Airways or Qantas websites, as outlined in our previous articles

This is how many business class seats you can snatch if you book far in advance.

The most important task is to get a flight over the ocean. It’s much easier to find a connecting flight out of Hong Kong if HK is not your final destination. Cathay Pacific flies between Hong Kong and the following U.S. cities: Boston, Chicago, Los Angeles, New York (JFK and Newark), and San Francisco. 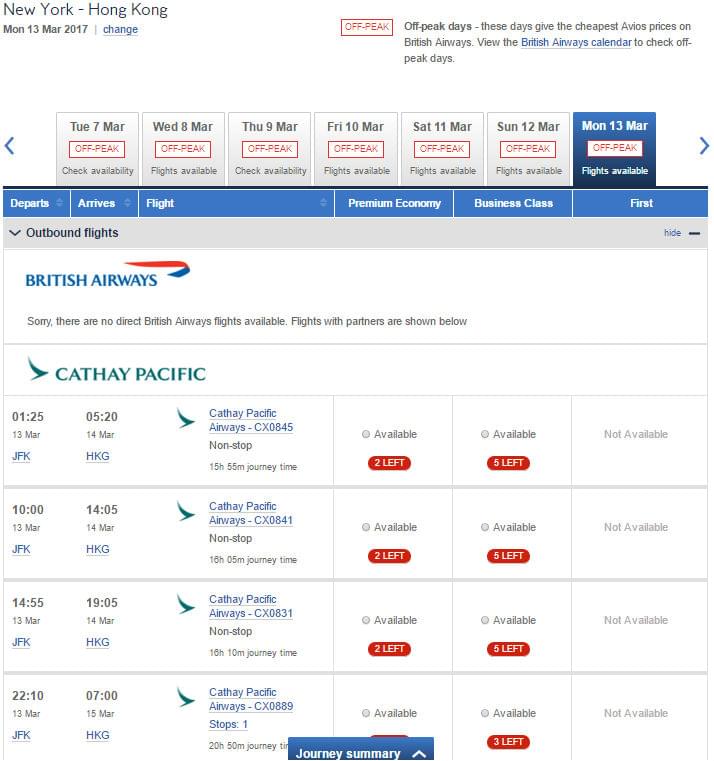 Just remember that unlike these other frequent flyer programs, you can only book an AA award up to 330 days ahead.  And, by the way, AA routing rules are much stricter than other airlines, so when you are doing research on British Airlines, for example, don’t “fall” for some options like flying to Asia via Europe or the Middle East – American rules won’t allow it anyway.

Japan Airlines is another of AA’s oneworld partner airlines that can take you almost anywhere in Asia via Tokyo. It flies between Tokyo and the following Continental U.S. cities: Boston, Chicago, Dallas, Los Angeles, New York (JFK), and San Diego. Japan Airlines also flies between Osaka (Kansai) and Los Angeles. 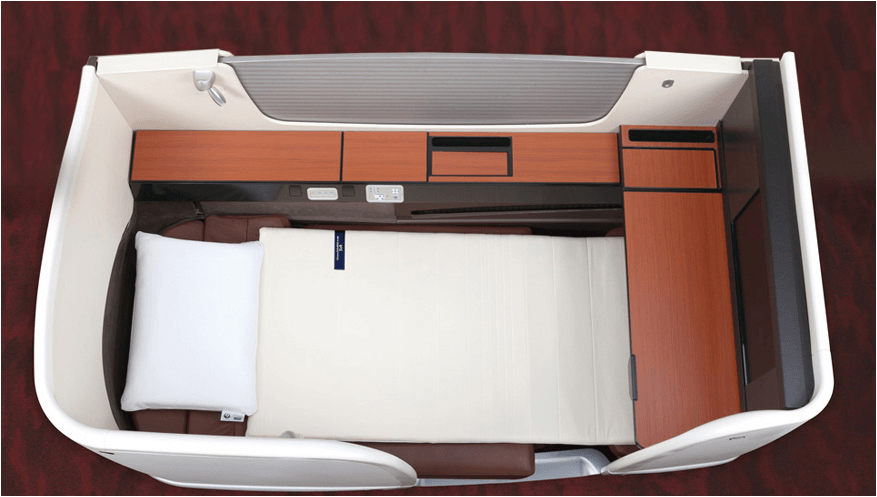 Japan Airlines’ new premium class cabins are nothing short of fabulous in hard product and services, and it can give Cathay Pacific a run for its money. The problem is, though, that some JAL airliners still occasionally feature old angle-flat seats in business class. The best bet is finding a seat on a 777-300 rather than on a Dreamliner. Check seatguru.com to find which seat you are flying in before booking your award.

If we research these flight numbers further on seatguru.com, we’ll see that they are “not created equal.” The JL0003 is on a Dreamliner, which doesn’t have first class (and it doesn’t have Internet, either), while JL0005 is on a 777-300, which does feature first class and Internet service. Most importantly, a JAL’s Dreamliner has angle-flat seats, while a 777 has Sky Suites with fully flat seats. 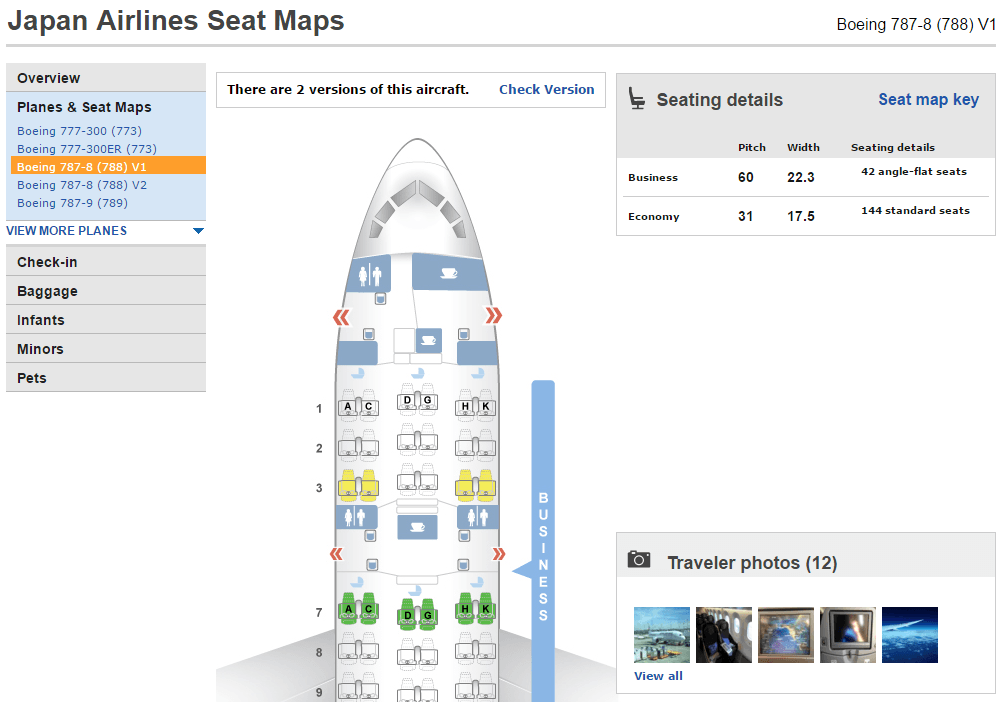 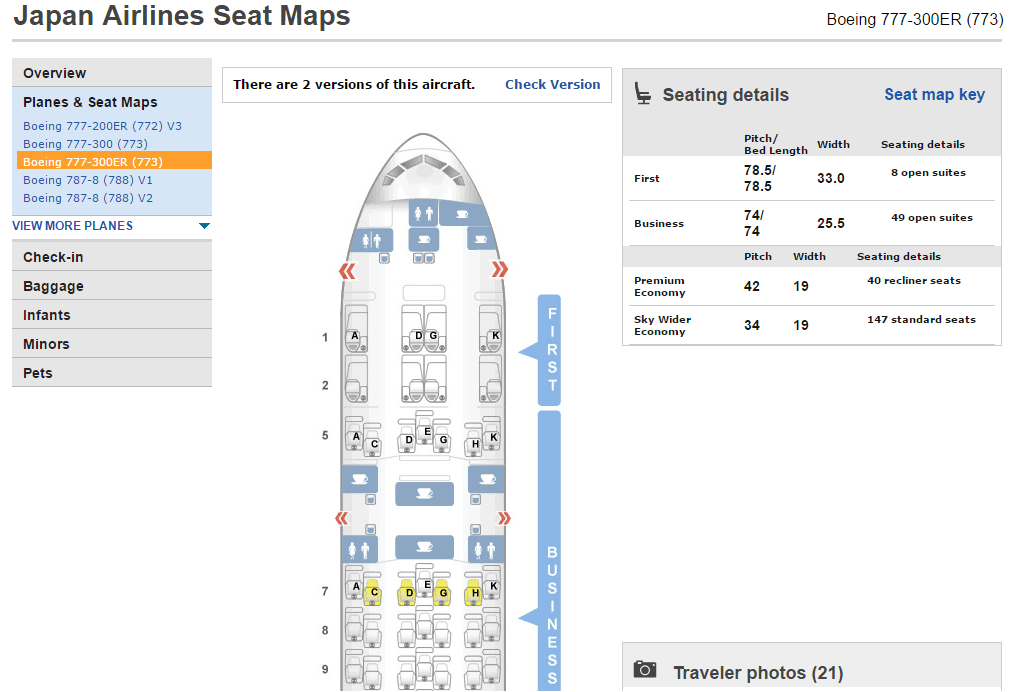 According to the JAL website, Sky Suites in business class are available on the following flights:

In addition, JAL is installing Sky Suites on its Dreamliner service between Boston and Tokyo that starts on June 11, 2016 with flight numbers JL007 (Boston – Tokyo) and JL008 (Tokyo – Boston).

There are eight first class seats in first class and 49 Sky Suites in business. Even though these are open, and not enclosed suites like in Emirates or Asiana first class cabins, they are designed to offer unparalleled privacy. And Sky Suites, especially the window suites, are probably the most private suites in a business class cabin, bar none!

Remember that you can’t book your flight on the British Airways or Qantas websites. You must call American with the flight numbers you’ve found to complete your reservations.

Next: American Airlines and One World: Best Business Class Redemptions to the Middle East and Indian Subcontinent.