For North American flyers, its easy to be confused by all the luxurious Middle Eastern carriers and their provenance.

Gulf Air could be easily taken for a regional carrier if you look just at the name. But it’s the flag carrier of the country of Bahrain, an island nation in the middle of the Persian Gulf that has a fascinating history but has not yet made it on the international tourist radar in the same way as Dubai, Abu Dhabi, and the other cities of the nearby United Arab Emirates.

Gulf Airs distinctive product has become known among savvy frequent flyers for its high level of service and earning opportunities, a category for which it almost won a Freddie (the Oscars of frequent flyer programs) in 2012.

Without a co-branded credit card, it seems like it might be hard to accumulate Falconflyer miles. But with earning partnerships with American Express Membership Rewards and IHG, Hilton and Radisson hotels, as well as frequent high-value promotions, miles are surprisingly easy to rack up through transfers. You can also earn two miles per dollar on hotels booked through gulfair.com.

Despite the relatively small population of the 34-mile-long island, the program which initially launched in 1994 and relaunched recently in 2011, hit the million-member milestone in fall 2013. The world-renowned Etihad grew out of Gulf Air, so its little surprise that Gulf Air’s Falconflyer program has so many happy members.

How Can You Use Gulf Air Falconflyer Miles? 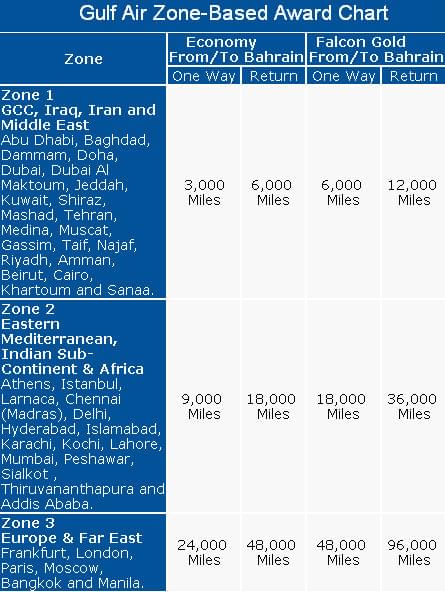 If you keep your eye on the Gulf Air promotions page (or our Earn section here at RewardExpert), you can also sometimes snag flights, including business class, at 50 percent of the usual award pricing.

Flights booked through Gulf Air on Virgin Atlantic, however, are ticketed according to a zone-based award chart, with flights from the eastern U.S. to London beginning at 35,000 miles one way in economy and 80,000 miles in upper class.

Gulf Air also offers a variety of flight-related ways to use your miles, including lounge access and paying for extra baggage, in addition to the usual flight and upgrade awards.

Unlike other Middle Eastern carriers that charge an unbelievable number of points to book their own flights with their own miles, you can get great redemptions on Gulf Air flights with Falconflyer miles.

These are particularly great in upper class, where you’ll never pay more than 96,000 miles roundtrip on the longest routes that Gulf Air flies, and you can get around the region in first class for just 6,000 per flight.

While it can often make sense to use American Airlines to book Gulf Air flights, the reverse is rarely ever true. Gulf Airs distance-based redemption chart for American typically charges twice what you would pay booking AA through their other main distance-based partner, British Airways. You’ll also typically get better rates simply booking directly with AAdvantage miles. 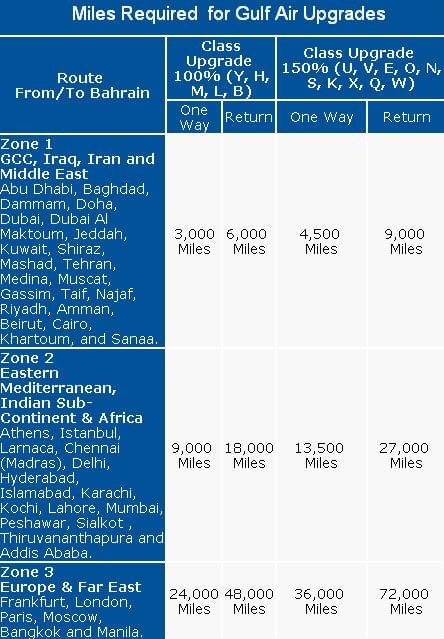 Once you have achieved elite status, fewer points are required to retain your status in subsequent years.

Gulf Air offers three co-branded credit cards, but they are only available to Bahrain residents.