As New Zealand’s flagship carrier, Air New Zealand has great strengths domestically. Like its neighbor Singapore Airlines, this island-based carrier also covers a lot of ground beyond its shores.

Air New Zealand’s 4,000 weekly flights are split between 26 domestic destinations and 27 destinations abroad. It offers connections to western North America, including San Francisco, Los Angeles and Vancouver. Due to its membership in the Star Alliance, the largest airline alliance, the power of Air New Zealand Airpoints Dollars expands to 18,000 daily flights.

While there have been a lot of complaints about U.S. carriers unbundling fares and offering too many fare options, Air New Zealand has allowed passengers to pay for exactly what they want and nothing more for years. In 2004, it was one of the first airlines worldwide to award points based on dollars spent rather than miles flown.

A quick glance at Air New Zealands award charts can set you in a tailspin, especially if you’re new to the points and miles game. Air New Zealand prices their awards in hundreds of points instead of thousands of points. Their system equates one Airpoints Dollar with one New Zealand dollar for redemptions.

This transparent award approach paired with the airline’s healthy dose of Kiwi flavor, such as Hobbit-inspired safety videos and national rugby team-themed black planes, have twice earned Air New Zealand the Airline of the Year award from Air Transport World.

How Can You Use Airpoints Dollars?

While Air New Zealand ties Airpoints Dollars at a one-to-one rate with the New Zealand dollar, the price is also related to the type of fare purchased. Complicating matters further, there are also different types of fares depending on what region you’re flying in.

Generally, for international flights you can choose from:

Domestically, your options are:

Air New Zealand does not have capacity controls on award flights because you can use your Airpoints Dollars to buy any seat on any flight. The same is not true for partner airlines and companion awards, which operate on separate, fixed-priced award charts. Prices for partner flights and companion fares are very similar.

Air New Zealand’s partner award chart was recalibrated in 2014, matching the award price more closely to the typical cash price of each flight. There is still some value to be had, though, particularly with flights to Hawaii and Tahiti. Economy flights are 450 Airpoints Dollars between Auckland and these destinations. Business class, which is usually triple the economy price, is a very reasonable 795 Airpoints Dollars.

The worst way to use Airpoints Dollars is on last-minute flights operated by Air New Zealand. As the price of all redemptions on Air New Zealand-operated flights are tied to the cash price of the ticket, the cost will be significantly higher than if you’d booked a few weeks earlier.

In these cases, you would be better off using miles from a different Star Alliance partner, or using a different airline entirely.

Airpoints upgrades are available on both Air New Zealand-operated flights and flights with Star Alliance partners. They are applied per flight, and not on the entire journey. Upgrades are not available for companion tickets, Grabaseat fares or other discounted fares.

On international flights, members can bid on OneUp upgrades. If a member has elite status, or if the flight is with a Star Alliance partner, upgrades can be purchased for a fixed rate using Airpoints Dollars. 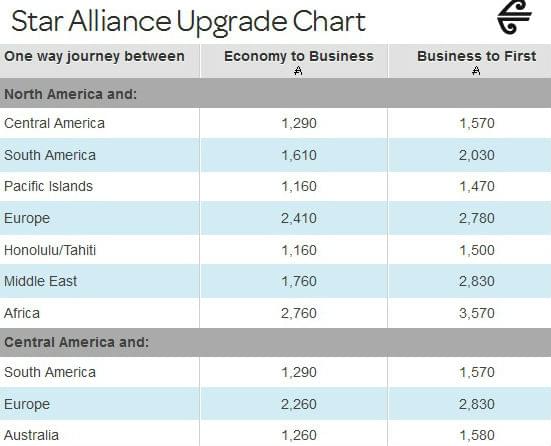 Each subsequent level includes the perks of the previous level unless stated otherwise.