When we first reported on the Dreamliner last year, we featured eight airlines that were flying Boeing’s new 787-8 passenger aircraft. There are now 34 airlines that boast the plane in their fleets. So many that we’ve dedicated a two-part series to the carriers and their routes and service classes.

The latest version of this aircraft, the Boeing 787-9, is now flying too. The 787-9 has a stretched body, so it can carry more passengers and fly longer, making long hauls such as United’s route between Los Angeles and Melbourne possible.

The airlines are listed alphabetically, so you’ll see the latest carriers to add the plane to their fleet, such as Vietnam Airlines and Xiamen Air, in Part II. Stay tuned for that.

Here’s the A-K list of airlines currently flying the 787:

Cabins: The airline offers 32 lie-flat seats in business class and 211 seats in economy.

Cabins: The airline offers 28 seats in business class and 222 in economy.

Routes: Air India flies 787s from Delhi and Mumbai to cities in Asia, Australia and Europe, and within India.

Routes: Air New Zealand was the first to get the Boeing 787-9, and it flies them from Auckland to Perth, Tokyo (NRT) and Shanghai.

Routes: ANA was the first airline to fly the Boeing 787-8. From Tokyo (NRT), the airline flies them to Beijing, Shanghai and San Jose; and from Tokyo (HND) to a variety of cities, including Beijing, Frankfurt, Hiroshima, Okinawa, Osaka, Sapporo and Taipei.

Cabins: The carrier flies three versions of the 787-8: Two versions have business and economy class cabins, while the third also offers 21 premium economy seats. There are two versions of business class seats: Business Staggered on new 787s and the original Business Cradle.

Routes: American Airlines’ first Boeing 787-8 flew domestically between its hubs in Chicago and Dallas/Fort Worth before starting nonstop service from Dallas/Fort Worth to Beijing and Buenos Aires. New routes will be launched over time, as more aircraft are delivered.

Routes: Arkefly is a charter airline based out of Amsterdam. It flies 787s to Aruba, Bonaire, Curacao, Holguin, Varadero, Cancun and Punta Cana.

Cabins: The carrier offers 47 seats in premium economy and 241 seats in economy.

Cabins: The airline offers 18 seats in business class, 35 in premium economy and 157 in economy.

The 787-9 has British Airways’ typical four-class cabins: eight first class seats in a 1-2-1 configuration, 42 seats in business class, 39 in premium economy and 127 in economy.

Routes: The first Dreamliner route flown by China Southern was Guangzhou to Beijing. Now the airline also flies them from Guangzhou to Auckland, London (LHR), Paris (CDG) and Vancouver.

Cabins: Initially, China Southern was the only airline that installed a first class cabin on its 787s, but that has since changed. The airline offers four first class Skybeds, 24 business class seats and an economy cabin that accommodates 200.

Routes: Ethiopian Airlines was the first African airline to fly the Dreamliner. It serves the following destinations from its hub in Addis Abada: Dubai, Dublin, Frankfurt, Nairobi, Harare, Los Angeles and Lusaka. Future routes will include flights to Rome, Milan and Stockholm.

Cabins: The airline offers 24 seats in business class and 246 in economy.

Routes: Etihad flies the 787-9. The first flight was from its hub in Abu Dhabi to Dusseldorf. Routes to Brisbane, Moscow, Mumbai and Washington, D.C. are planned for the future.

Cabins: The airline designed brand-new seats for its 787-9 aircraft. There are eight Etihad First Suites, 28 business studios and 199 economy seats available. In 2016, a two-class configured 787 is scheduled to be added to the fleet.

Routes: Hainan Airlines flies 787s from Beijing to destinations within China, as well as to Boston, Chicago, Seattle, Toronto, and Washington, D.C.

Cabins: The airline offers 36 seats in premium economy and 177 in economy. 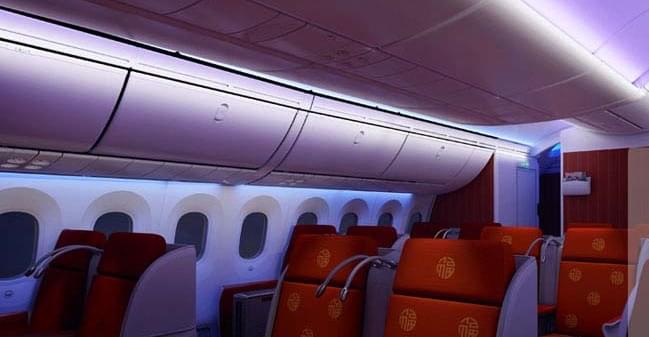 Routes: Based in Brussels, Jetairfly flies its 787s to vacation destinations in the Caribbean, such as Cancún, Punta Cana, Montego Bay and Santo Domingo.

Cabins: There are 300 seats onboard, with 47 in premium club, or business class, and 253 divided between economy and economy plus.

Cabins: The airline offers 21 seats in business class and 314 in economy.

Cabins: With its two-cabin setup, the airline’s Premier World, or business class, seats 30 passengers, and economy has 204 seats.

Next week: Part II, featuring airlines from L to X.