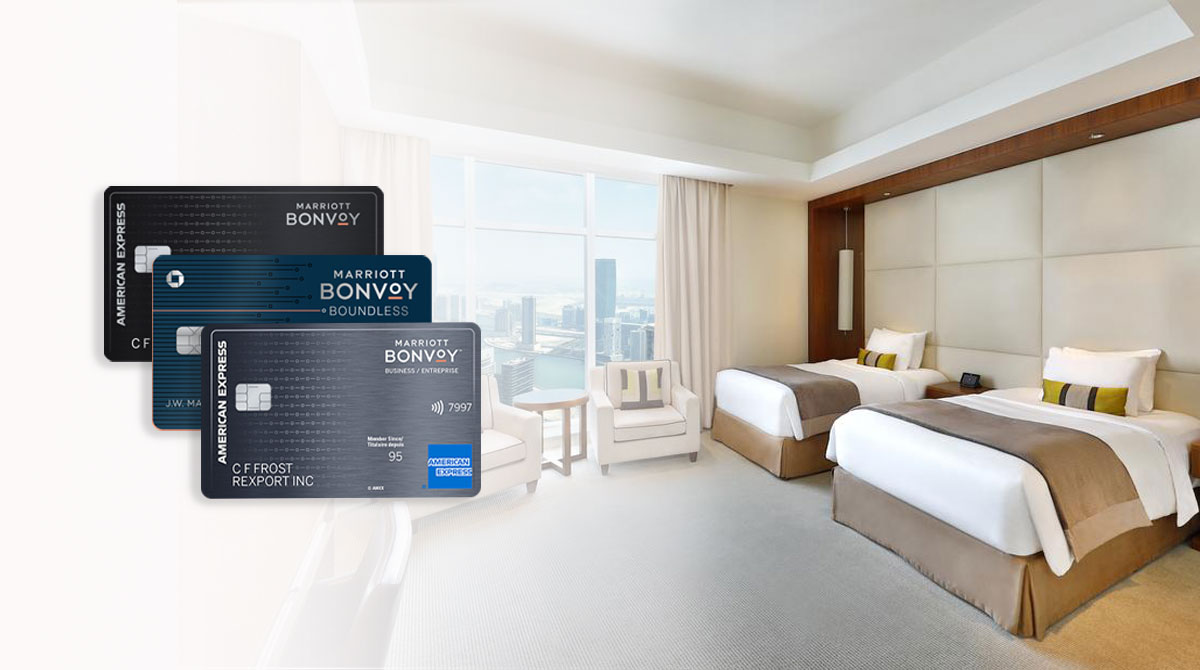 Which means all the existing Starwood Preferred and Marriott Reward credit cards are getting a makeover. As part of the process, the five existing cards (3 Starwood American Express Cards and 2 Marriott Chase Visa cards) are shrinking into just three cards.

This Article Will Cover

But you have to act fast. The huge bonus offers go away soon.

So, to help you decide, here’s what you need to know to pick the Bonvoy credit card that’s right for you.

The Three Reasons You Might Want a Marriott Bonvoy Credit Card

First, let’s look at why a Marriott credit card might be a good choice.

1. You’re a Marriott loyalist. These cards come with some pretty nice perks, and a (think: 100,000 Marriott reward points) all tied to Marriott, of course. So if you regularly retire to Marriott properties when you’re traveling, then Marriott credit card is a wise choice.

2. You Like the Idea of Earning a Free Hotel Night Annually. Each year, on the anniversary of your Marriott Bonvoy card, Marriott awards you a free hotel night. Which card you sign up for determines the value of the room you can claim. Still, a free night every year, regardless of level, can be a good value.

3. Status Within a Hotel Chain is Important to You. Each of the Marriott Bonvoy credit cards comes with Marriott Elite Status attached to it. As with the hotel night, your status level depends on the card you sign up for.

So, let’s look at the three Bonvoy credit cards and what they each offer:

First, let me say that we won’t be discussing the new Marriott Bonvoy Card from American Express or the Marriott Bonvoy Premier Plus Business Visa Signature card. Both of those were closed to applicants back in February.

Instead, we’re focused on:

The Marriott Bonvoy Boundless Visa is an excellent card for Marriott fans – but the bonuses I’m about to mention go away on May 2, so you have to act quickly.

Among the many benefits of the Bonvoy Boundless are:

Note: The Marriott Bonvoy Boundless card is subject to Chases 5/24 Rule, which basically means that your application will be rejected if you’ve opened five or more personal credit cards across all banks in the past 24 months.

As with Marriott Bonvoy Boundless, the Bonvoy Brilliant card by American Express offer a load of perks, that might be a better deal, if you don’t mind the large annual fee. The AmEx bonus offer ends Apr. 24.

If you’re looking for a Bonvoy , the American Express Marriott Bonvoy Business card is your only option. But it’s not a bad option.

Is A Marriott Bonvoy Credit Card Right For You?

And though I keep mentioning Marriott specifically, the Marriott Bonvoy credit cards earn points at 30 brands under the parent company – including Sheraton, Ritz-Carlton, St. Regis, W Hotels, Le Meridien, Westin, and many others.

You can also transfer Marriott Points to more than 40 airlines. Generally speaking, 60,000 Marriott points equals 20,000 airline miles, plus a 5,000-mile bonus that Marriott offers when you transfer.

In terms of the overall quality of the Marriott loyalty program, however, it’s a mixed bag.

The chain is widely viewed as offering fewer benefits at comparable levels. For instance, Silver Elite is pretty much meaningless: 10% from each stay and priority-lane checkout. For anyone who travels more than once a year, those benefits are yawners.

Other Options For Hotel Credit Cards

The Capital One Venture card offers 50,000 bonus miles after spending $3,000 in the first 3 months, and you get 2x miles on every purchase, plus 10x miles at thousands of hotels (far superior to Marriott’s 6x). That 10x bonus is slated to go away at the end of January 2020, but as I’ve written before, given the level of competition in the credit-card industry these days, I wouldn’t be surprised if Capital One Venture keeps that bonus in place. Annual fee: $0 intro for first year; $95 after that thereafter.

If you’re looking for a business credit card with a valuable sign-up bonus, look at the Ink Business Preferred card from Chase.

It comes with an 80,000 -point sign-up bonus after spending $5,000 in the first months. You’ll also earn 3x miles on the first $150,000 in combined spending each year for travel; shipping; Internet, cable and phone; and on advertising purchases on social media sites and search engines. Plus, the points you redeem are worth 25% more when you redeem them for travel through Chase Ultimate Rewards. And there’s

No question: 100,000 bonus points is a big deal. Marriott’s free-night structure starts at 7,500 points, depending on the hotel, so 100,000 points could go a long way toward covering lodging on your .

And the free night each anniversary is a nice perk as well for both the Bonvoy Boundless and the Bonvoy Brilliant cards.

But the minimal elite status isn’t particularly noteworthy with Bonvoy Boundless. Bonvoy Brilliant, with Gold Elite status, is a bit better with room upgrades and such, and the $300 statement credit clearly has value.

That said, there are plenty of if hotel stays are your primary focus.

But we want to know: What’s your take on the new Marriott Bonvoy Cards – is the super-sized 100,000-point bonus enough to get you to sign up?

Let us know in the comments below.