Since details on the upcoming release of the Chase Sapphire Reserve card were originally leaked, there has been a ton of new information hitting the internet. On August 15th Chase officially announced the card via Twitter. However, the biggest news was that on the same day, a developer application link was accidentally made publicly available for a few hours.

The link was published on Reddit and many people took the opportunity to apply for the card. Many of those who applied shared their personal information such as income, FICO, 5/24 status, and application result. This data gives those of us who have yet to apply several reasons for optimism!

Many People who are Over 5/24 are Getting Approved

Chase has a broadly applied guideline to not approve people for new credit cards if they have opened five or more new credit card accounts in the past 24 months. There are some exceptions to the rule, including the Chase Ritz Carlton Card. Since the Ritz Carlton card has a high annual fee, many have speculated that Chase may be more lenient for these applications because the fee helps cover whatever perceived risk Chase believes they are limiting with the 5/24 rule. This has led to optimism that people who are over 5/24 may be able to get approved for the Sapphire Reserve card. Based on reports on Reddit, the optimism appears to be warranted.

The chart below displays Reddit user’s responses for those that were above 5/24 when they applied, and listed their application results, including the results of any calls they may have made to the reconsideration line. There were 90 such people who reported their results, and a majority of people have been approved, while many more still have applications pending. Only 6 out of 90 people over 5/24 were denied so far. It’s certainly possible that Chase will tighten up when the official public application goes live, but since they were not auto-approving everyone they clearly had most if not all of their desired controls in place. 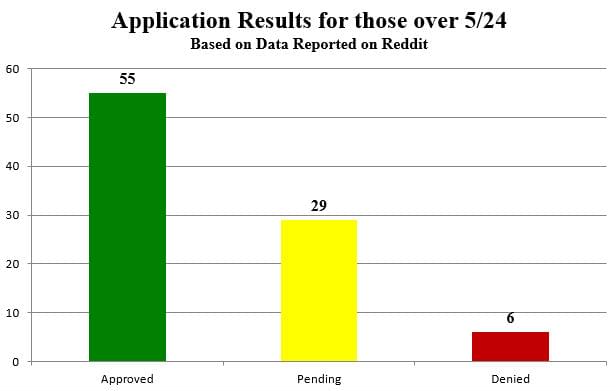 While good credit is certainly an important factor in getting approved, Chase is by no means limiting approvals to those who have extremely high FICO scores. 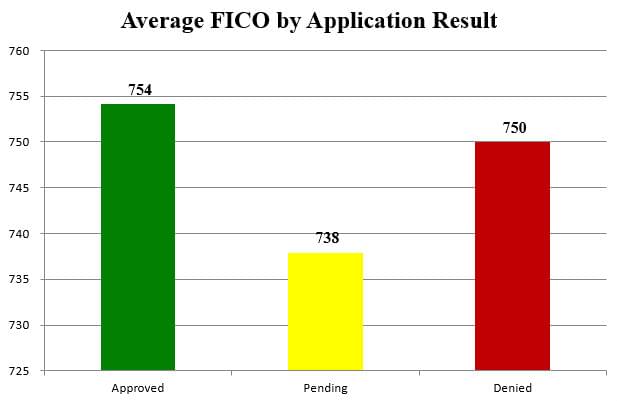 Chase is also not limiting this card to high-rollers, as those who have been approved actually have a lower reported income than those that have been denied. 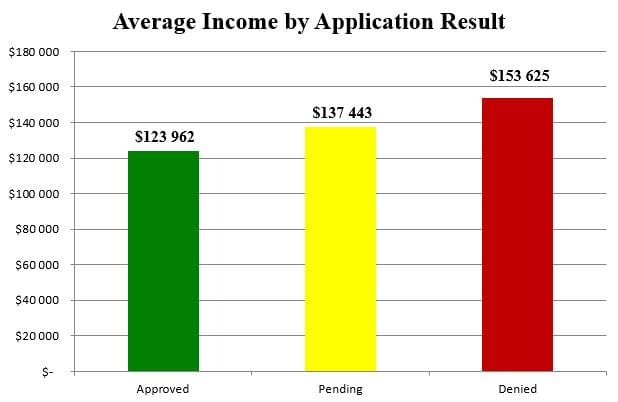 The card was officially released yesterday, so we will see a bevy of data points next week which will confirm if Chase has loosened the reigns for Sapphire Reserve applicants, or if people were allowed to slip through in the premature launch. The fact that many applicants initially received a pending status and were only approved after talking to a Chase representative leads us to believe Chase will likely not be enforcing 5/24, at least temporarily.

Is the Sapphire Reserve Card worth a Long-Term Hold?

The value proposition for this card in the first year is a no-brainer. On top of the 100K point sign-up bonus, which is worth a minimum of $1,500 when redeemed through Chase’s travel booking portal, the card also comes with a $300 travel credit per calendar year. Since this benefit is per calendar year, it can be earned twice in the first year, meaning the $600 worth of travel credits will have already more than made up for the $450 fee. However, more analysis is required to determine if the card is worth holding after the first year.

Two possible ways to look at this are on a relative basis and an absolute basis. On a relative basis, we assume that you are someone who wants to hold at least one premium Ultimate Rewards card to maintain the ability to transfer points to Chase’s hotel and airline partners. As such a person, we also assume you travel enough to make easy use of the annual $300 travel credit. The other two possibilities are the Ink Plus Business card and the Sapphire Preferred card. Both of these cards carry $95 annual fees and give a 25% bonus when booking travel through Chase’s portal versus the Sapphire Reserve’s $450 annual fee and 50% point value bonus.

After accounting for the $300 travel credit, the Sapphire Reserve’s annual fee effectively becomes $150 or $55 more than the two alternatives. Since the Reserve makes your Ultimate Rewards an extra 0.25% more valuable, we can simply take $55 divided by 0.25% and come up 22,000 UR as the break-even amount of points that need to be redeemed through the portal to make up the annual fee difference. This is a very conservative assumption because we assigned no value to the Sapphire Reserve’s other benefits such as the Priority Pass lounge membership, the Global Entry or TSA Precheck application fee credit, or the bonus category multipliers. Another way to look at it is to compare the Reserve’s 3x earning on travel and dining purchases versus the Preferred’ s 2x rates. If we value UR at a rock-bottom 1.5 cents/point for both cards then $3667 of annual spending on these two categories will result in a breakeven value of $55, again with no value assigned to any other benefit.

Instead if we evaluate the card on an absolute basis, we must justify the $150 effective annual relative to holding no other cards. There are many ways this could be achieved, such as earning and redeeming 10k UR at a value of 1.5 cents/point or by making use of the lounge access benefit several times.

If you have other UR-earning cards the Sapphire Reserve increases the value of your other points. If you make use of the lounge access, you can easily get $20-40 worth of free food and drinks per trip. If you are someone who does a fair amount of travel, it should not be difficult at all to make up for the cost of holding this card. As with all cards, benefits are always subject to change, so you can always apply for the card, hold it for one year, and use your experience to determine if it deserves a permanent place in your wallet.