Asiana Airlines is a member of the Star Alliance and one of the two major Korean airlines. The airline is well-respected by both industry insiders and passengers for its excellent service and product.

Asiana Airlines’ loyalty program, Asiana Club, is a well-rounded program that offers good value on award flights and easy accrual of miles. Although some discounted fares only earn 70 percent of the miles flown, flights on Star Alliance carriers also earn miles. In addition to Asiana Club, Asiana Airlines also has a special program for kids under 12 called Magic Miles, where they can earn 0.75 miles for each mile flown.

The Family Mileage Plan for mileage transfers is a major Asiana Club benefit. Many airlines do not allow aggregating within a family. Asiana Club, though, has a generous sharing scheme that allows you to combine miles among spouses, children, parents, grandparents, grandchildren, siblings and even in-laws.

One major downside of Asiana Club is that it adds fuel surcharges to award flights. However, almost all foreign airlines now add fuel surcharges to their flights, and Asiana’s are relatively moderate and not unreasonable, considering its superior product and services.

Aside from fuel surcharges, there are relatively few fees associated with the airline’s award flights, and those are generally very reasonable. Redepositing miles, for example, costs $30 or 3,000 miles, compared with $150 or more charged by many U.S. carriers.

How Can You Use Asiana Club Miles?

Asiana Airlines and Star Alliance members have separate award charts, but flights cost about the same for both. Asiana does edge out its partners on flights to Asia though, because it offers excellent premium products such as Business Smartium and First Suite Class.

Asiana has one award fare. It doesn’t offer flex, market or other award levels that many other airlines have recently introduced. This makes its award charts simpler than some, but keep in mind that the cost given is for off-peak travel. During the peak season, it charges 50 percent more miles. For flights from the U.S., peak season is mid-May through early July, as well as most of the month of December.

Not surprisingly, booking in advance yields the most availability. Premium class award seats can be difficult to find on many airlines, particularly those offering exceptional services like Asiana’s First Suite Class. However, Asiana is generous with allocating premium award seats for its members. It’s possible to snatch two or even three First Suites on its flagship service between Seoul and New York or Los Angeles. There’s even a new A-380 service coming to New York this year that promises to be something special.

Overall, Asiana Club award prices offer good value, especially in premium classes. But there are some exceptional deals flying off-peak between the U.S. and Korea on Asiana, or from the U.S. to Europe or Latin America on a Star Alliance partner using Asiana Club miles. 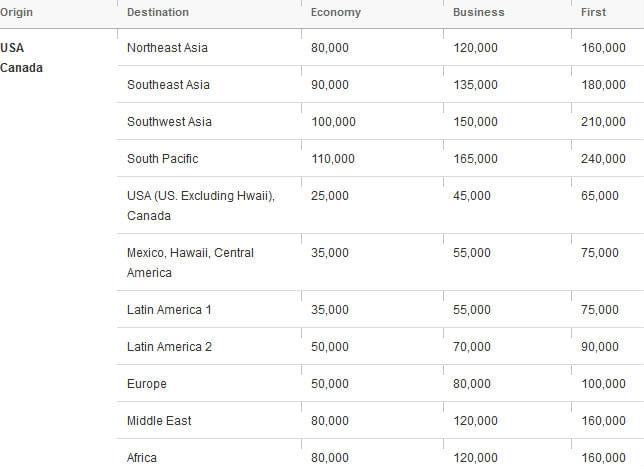 Asiana splits Latin America into two regions for its award chart. The airline offers good redemption rates to the closer destinations of Bolivia, Colombia, Ecuador, Panama, Peru and Venezuela, but it offers outstanding value if you’re flying in a premium cabin to Argentina, Brazil, Chile, Paraguay or Uruguay. At 70,000 miles for business class and 90,000 for first during the off season, you’ll save 30,000 and 35,000 miles, respectively, over American Airlines awards.

The most expensive tickets in Asiana’s award chart are for premium cabins above standard business class on flights to Australia and destinations in Asia that aren’t Korea. Round-trip Business Smartium, First and First Suite tickets on these routes go north of 200,000 miles.

In addition to redeeming miles for a plane ticket, you can also upgrade your cash ticket with miles. You can only upgrade one class: economy to business, or business to first. If you are flying on Asiana between the U.S. and Korea, you can upgrade your economy ticket to business for 60,000 miles or to Business Smartium for 80,000 miles round-trip.

You can also upgrade with miles on Star Alliance partner airlines. Upgrades cost 76,000 miles round-trip on flights between the U.S. and Korea. Award tickets are not upgradable.

Each level includes the perks of the previous level:

There are two Asiana Airlines credit cards available in the U.S. Although both currently come with a 10,000-mile sign-up bonus, the Amex card sometimes goes up to 38,000 miles.

In addition, you’ll receive two lounge passes, 10,000 bonus miles and $100 off an Asiana Airline ticket every year. The annual fee is $99.

The Asiana Visa Business Card offers fewer benefits. You’ll earn two miles per dollar on Asiana Airlines purchases and one mile per dollar on all other purchases. The annual fee is $80.