Take the Plane to the Train in Europe

Frequent flyer miles can be used for a number of things besides flying. You can book hotels, car rentals, and even train travel if you have the right mileage currency. Rail travel can be especially useful to navigate Europe once you get there on miles. European cities and towns are so close to one another that the state-of-the-art rail network there gives airlines a run for their money with its speed and efficiency.

Take Eurostar, for example. It’s a way to get from London to Paris, but it is much more than that. Eurostar can also get you to Brussels, Lille, or even the French Alps. It takes you from London to Paris or Brussels in about two hours and to Lille in an hour and forty minutes. With connections, it can also take you to the following cities:

Travel is convenient as the train usually take you right into a city center, so you don’t need a taxi to or from the airport. You also don’t need to arrive at the station two or three hours before departure in order to clear security. And you get a comfortable seat instead of being packed in like a sardine. Most importantly, your ride can be low cost using miles or points.

British Airways and Virgin Atlantic allow you to redeem their miles for rail travel. Booking with Avios can be a little complicated for overseas travelers, as Avios.com is a separate program that requires a U.K. address. However, if you have it, or have a friend or family in the U.K., you can buy a roundtrip ticket between London and Paris or Brussels for 9,000 Avios. That can be a real bargain because Eurostar tickets can cost over $300.

Virgin Atlantic charges more for Eurostar bookings, but its miles are less valuable in the air than Avios and hard to use. Virgin Atlantic charges 18,000 miles for a train ride between London and your choice of Paris, Brussels, and Lille. The same ride on the plane in business class will run you 30,000 miles. You should not use award miles if you have plenty of time in advance to buy your Eurostar ticket. Train fares are much cheaper when bought early. However, if you need a flexible ticket, or when you buy close to your departure date, using award miles makes a lot of sense.

A lot of people complain that it’s difficult to redeem miles for flights to Europe. But since the countries are so small, and the trains are so fast, it almost doesn’t matter which destination city is available. If you can’t fly directly to Paris, go to London and grab a train to get to the City of Light. That way you get to see two cities instead of just one.  Even at the height of summer, the availability from the U.S. to London is normally quite good. Just don’t use British Airlines to fly there, its fuel surcharges are hefty. Here are some carriers that can get you to the European continent: 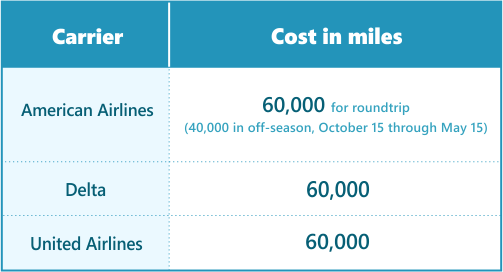