As South African Airways is a member of the Star Alliance, there’s no doubt that you can get to a lot of places with the airline’s Voyager miles. The question is: Would you want to?

Of course, this change wasn’t received very well by long-time customers. But unlike many other airlines, SAA has also preserved some of the valuable aspects of its former award program. In addition, all of the airline’s prices are tied to the South African rand so North American travelers can find some great values thanks to the exchange rate.

How Can You Use South African Airways Voyager Miles?

Under its new “money-focused” scheme, South African Airways is really pushing members to use miles for non-airline awards, such as car rentals, spa vouchers and retail products.

If you want to use your miles to actually fly, SAA gives you two main options. JourneyBlitz Awards are available randomly as promotional awards and basically follow the old award pricing. Dynamic Awards are tied to the cash price. Thankfully, fuel surcharges are included.

For local airline partners that are basically an extension of SAA—Airlink and SA Express—the previous MileageKeeper (like a saver fare) and AnyDay award pricing levels remain in effect. Other partner airlines have their own set prices for economy, business and first class. Non-alliance airlines each have their own individual charts, and Star Alliance airlines are all addressed in the same award chart. 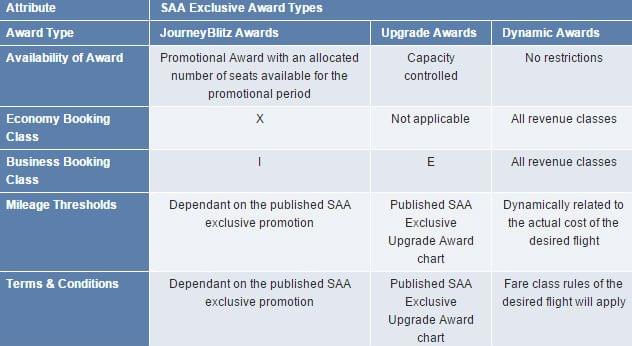 The best parts of the South African Airlines award chart are partner airline flights between the U.S. and South America. This zone-based chart counts the whole of South America as one zone, while many airlines split it into two or three different sections. Furthermore, while economy seats are a decent deal at 50,000 miles roundtrip, business class is a steal at 75,000 miles.

Since the introduction of Dynamic Awards pricing, they have become the worst possible ways to use your Voyager miles—and not just when cash prices are high. The markup on these awards is really significant, around nine to 10 times the price in South African rand. Though the exchange rate can work in your favor, that still means you’re easily looking at 200,000-plus miles for a “cheap” roundtrip to South Africa from the U.S., with badly timed flights or awkward routing.

Upgrades on South African Airways are extremely restricted, not only to primarily South African Airways-operated flights, but even to types of SAA flights. Upgrades are only available by sector and to the next highest level of service, and they are subject to high taxes, fees and surcharges.

Following the South African Airways devaluation, upgrade awards are both hard to come by and a bad value, so we recommend not using your miles in this way. 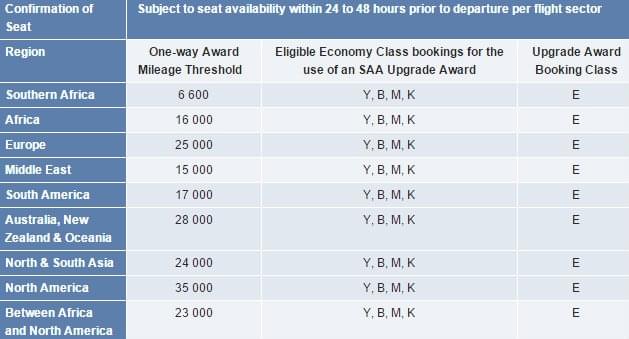