How to Predict and Avoid Fuel Surcharges on Award Tickets

In addition to saving up miles for a “free” trip, don’t forget to consider the taxes, fees and fuel surcharges you may have to pay. It’s impossible to avoid government taxes and fees, but the fuel surcharge is very dependent on the specifics of your ticket.

Despite their name, fuel surcharges only loosely track the price of oil, which has fallen by more than 60% in the last two years. A few airlines have introduced small cuts, but fuel surcharges can still be hundreds of dollars. Most carriers are renaming them as generic “carrier charges” and admit that they can be used to cover any kind of expense. They also create an opportunity for loyalty programs to raise the cost of redeeming your miles. Here, we explain which airlines collect surcharges on award travel and how you can calculate this amount in advance.

Some programs won’t collect any fuel surcharges. United MileagePlus is a great example. Others generally have exceptions for just one or two partners. American AAdvantage will collect fuel surcharges if you travel on British Airways or Iberia, and Alaska Mileage Plan will collect them for British Airways or Icelandair. Otherwise you’re in the clear.

The following table summarizes common loyalty programs and which of their partners are affected by fuel surcharges. Some of these airlines might operate a few flights (particularly domestic flights) that don’t have one, so there won’t be anything to pay. Other partners not listed may still have fuel surcharges on regular tickets, but the program has decided you won’t be responsible for them when you redeem miles.

Fuel surcharge policies should guide your award search strategy. British Airways, Iberia, and American Airlines are the three largest oneworld Alliance carriers with service between the United States and Europe. When redeeming American AAdvantage miles for a European award, finding award space on aircraft operated by American Airlines will help reduce the cost of the trip.

Estimate the Cost of Your Next Award

You can estimate these fees for your award ticket before you call the airline. The trick is to search for the same itinerary as a regular customer and examine the fare breakdown. Matrix Airfare Search by ITA Software (matrix.itasoftware.com) can help you obtain this information, and it may also be available on some other websites.

It is important to select the same airlines and connecting cities that are used for the award. Take the example of a business-class ticket from San Francisco to Frankfurt, connecting in Newark. The first half is on United Airlines and the second half is on Lufthansa, one of United’s partners.

Enter “SFO” and “FRA” as the origin and destination and “business class or higher” as your cabin. Then click on the link for advanced routing codes and enter “UA EWR LH.” This indicates that the first flight is on United (UA) to Newark (EWR). The second flight is on Lufthansa (LH). You don’t need to enter “FRA” because it’s already in the destination field. Continue alternating airline and airport for itineraries with additional connections. 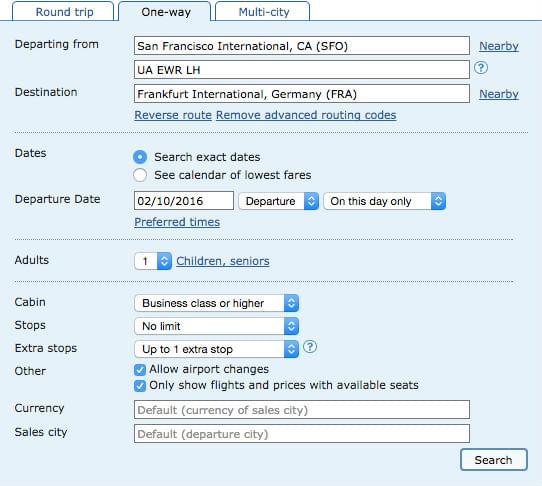 Select the correct itinerary from the results page and you should find a summary with a blue box that contains the fare breakdown. This has three components: base fare, taxes and fees, and the fuel surcharge. The miles you redeem will always cover the base fare. Fuel surcharges, commonly indicated by “YQ” or “YR,” are at the discretion of the program. Any other taxes and fees are your responsibility. 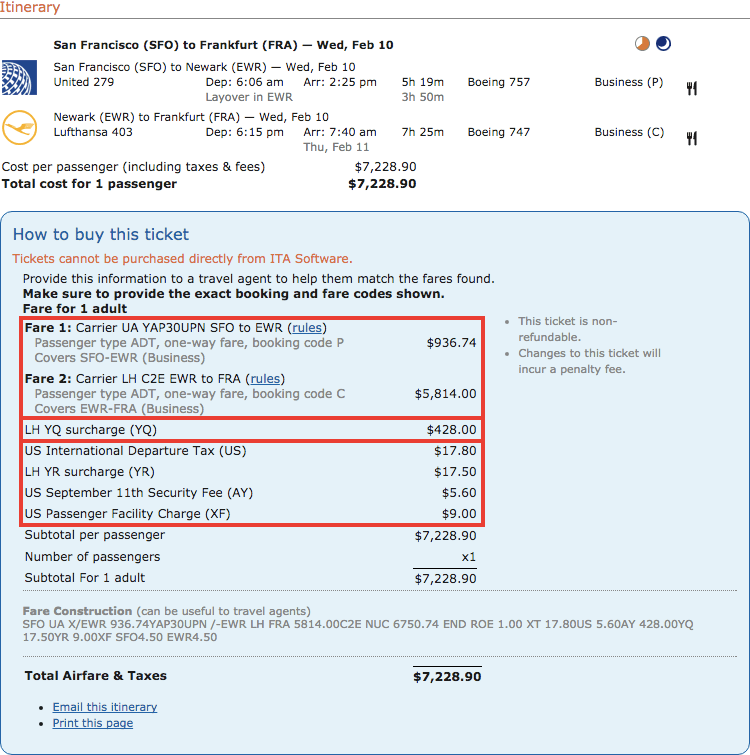 Looking up this information in advance can be helpful because not all airlines price their fees correctly when booking awards by phone. You always have the right to ask the agent to break them down if the total seems too high.

Despite all this effort, it can make sense to accumulate and redeem miles with different programs on the basis of fuel surcharges. Other aspects of the program, such as how quickly you earn miles or how easy it is to redeem them, can be important considerations, too.

For example, many domestic and short do not have fuel surcharges, so there’s no reason to worry about them if you’re flying across the United States. Different programs may also place the same destination in different regions and charge radically different prices to get there, so that a few extra dollars are worth redeeming fewer miles.

British Airways stands out for an unusual distance-based program that makes it very competitive on some routes. One example is from the West Coast to Hawaii. They charge only 12,500 Avios in economy class to travel on two partners, Alaska Airlines and American Airlines. Redeeming Alaska or American’s miles for the same ticket would cost 20,000 or 22,500 miles, respectively.

Some flights may have fuel surcharges that are low enough to be worth paying for the convenience. Cathay Pacific charges just $28 each way across the Pacific Ocean, and American Airlines would let you avoid this charge entirely. However, some customers have all their points in a separate bank-operated program like Membership Rewards or Ultimate Rewards. These programs both allow customers to transfer their points to British Airways but not to American Airlines.

Fuel surcharges are not inevitable. They are a rule like any other, and frequent flyers have a choice when they pick their favorite loyalty program or earn miles with a

Do you have any questions about taxes, fees and fuel surcharges? Ask the Experts.