Where Do They Fly?

Allegiant serves many smaller regional airports, so you may have to drive an hour or more to get to your flight. The airline also flies to a few major destinations, including Las Vegas, San Francisco (Oakland), New York (Newark), San Diego and Orlando.

On many of Allegiant’s routes, flights are limited to only a few days a week. While this saves money by filling seats, it can make planning trips more difficult. Consider splitting your outgoing and return flights between Allegiant and another airline if their schedule doesn’t fit yours.

Frontier’s international destinations are all popular beach spots located in Mexico, Jamaica and the Dominican Republic, making it an affordable option for a winter getaway.

Spirit Airlines has the largest fleet with 91 aircraft, but it serves only 59 destinations. While the carrier flies to some smaller regional airports, such as Niagara Falls and Charleston, West Virginia, it primarily focuses on larger U.S. markets. Its focus cities include Atlanta, Dallas/Fort Worth, Houston, Chicago, Los Angeles, Las Vegas, Orlando and Fort Lauderdale.

With more international destinations than Frontier, Spirit flies to over 20 airports throughout Mexico, the Caribbean and South America. It even offers flights to Cuba and as far south as Peru.

All three airlines charge extra for everything. You’ll pay for seat assignments, carry-on bags, checked bags and even in-flight beverages.

While you’re allowed to bring one personal item with you for free, it can’t be larger than a purse. That means you’ll need to pay for a bag if you want to bring clothing.

Carry-on bags are typically a bit cheaper than checked bags, but the actual cost depends on when you pay for the bag and the route you’re flying. Longer routes are more expensive, as is paying after you book. Adding a bag at the airport can be as much as $100, but paying for a bag when you buy your ticket typically ranges from $15 to $25.

You’ll have to pay to pick a seat before arriving at the airport, too.  If you don’t, you’ll get a seat assignment after you check in. Reserving a seat in advance typically costs between $10 and $30, depending on the flight and seat. Allegiant and Spirit offer bigger seats for anywhere from $40 to $200 extra. Frontier offers some seats with extra legroom.

Though fees vary a lot and are dependent on several factors, Allegiant tends to charge a little less than its competitors. Frontier does offer package deals on benefits, which can save money if you want all of the included perks, such as a seat assignment, priority boarding, bags and more.

Allegiant’s loyalty program, myAllegiant, doesn’t have a lot to offer. You cannot earn or redeem points without the airline’s co-branded credit card, and points are worth only one cent each. You can use points for any Allegiant purchase, though, including hotels, car rentals and attractions.

The price of Allegiant’s award flights are tied to the current market value. You pay the cash price of the ticket and then apply points toward the cost. The only way to earn miles is by making purchases with Allegiant’s credit card.

Spirit Airline’s region-based frequent flyer program, Free Spirit, has some great redemption options, particularly if you fly during off-peak times. While you don’t have to have carrier’s co-branded credit card to participate in the Free Spirit program, you do have to have the card to qualify for the cheapest tickets.

Spirit’s award chart is broken down by distance and date. Region 1, which are all flights under 1,250 miles, can be had for as little as 5,000 miles roundtrip off-peak, but can cost as much as 50,000 miles at the most expensive anytime rate. Spirit’s full award chart, including off-peak dates, is available here. 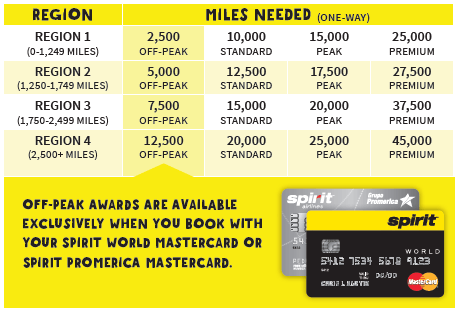 Frontier used to publish an award chart for its EarlyReturns program, but it no longer does. Instead the airline simply states the minimum miles needed to redeem for flights. A search for award flights suggests that the cost may now be partially based on demand, not just distance. In any case, one way domestic flights are as cheap as 10,000 miles, and international flights to Mexico, the Dominican Republic and Jamaica start at 15,000 miles.

If you do not have the Frontier Airlines credit card, then the carrier adds an award redemption fee to flights booked less than 180 days out. It costs $15 to book between 21 to 179 days before the flight, $50 for 7 to 20 days, and $75 for six days or less.

Every flight on Frontier earns at least 500 miles. Longer flights and more expensive tickets earn more. Unfortunately, Frontier is not more forthcoming with the details of how they calculate the exact number miles you earn.

While Allegiant does not offer elite status, both Frontier and Spirit do.

Frontier has the best program. With status comes a free carry-on bag on every flight, free upgrades to stretch seating at check-in, priority boarding, complimentary seat assignments, waived award redemption fees, discounted checked bags and free booking by phone. You must fly either 20,000 miles or 25 segments to earn Elite status.

If you’re serious about participating in any of these loyalty programs, you’re going to want to get the airline’s co-branded credit card. Allegiant requires you to have its card to earn and redeem points, and both Spirit and Frontier’s cards include nearly essential program benefits. Spirit cardholders get access to the cheapest redemptions and Frontier waives its award booking fees.

Here’s a brief overview of each card:

The only reason to get the Allegiant World MasterCard is for the free companion ticket, which you get if you buy a vacation package that includes either four nights at a hotel or a car rental of seven or more days. Otherwise, you’d be better off getting a more versatile and lucrative cash back or travel card. The annual fee is not waived and the sign-up bonus is only 15,000 points, which is worth exactly $150. You can get more from a lot of other cards.

If you often fly on Spirit or Frontier, though, you should consider their cards. The Frontier Airlines World MasterCard comes with a decent 40,000-mile sign-up bonus and an annual $100 discount if you spend just $2,500 a year. The discount covers the annual fee and the bonus is enough for at least a couple of cheap round-trip award flights.

The Spirit Airlines World MasterCard has only a 15,000-mile bonus, but you’ll earn double points on every purchase and get access to the carrier’s excellent off-peak redemptions. If you fly in the off season, you can get some really cheap tickets. Short-haul flights are only 5,000 miles roundtrip, which is enough to get you from New York to Florida. And for just 15,000 miles roundtrip, you could get from New York all the way to Portland, Oregon.

Honestly, the best budget carrier is the one you’re going to use. Though there’s some overlap, Allegiant, Frontier and Spirit serve different markets and airports. If one of these carriers works for you and the routes you fly, then use it.

If you have a choice, I think that Spirit’s region-based award chart and, in particular, its off-peak redemptions are hard to beat. The Spirit Airlines World MasterCard has a small sign-up bonus, but you’ll earn double points on everything. The annual fee is even waived for the first year.

Frontier isn’t bad either. It has a solid credit card with a good sign-up bonus and an annual $100 discount. Plus if you can earn status you’ll save a lot on extra fees.