The Delta SkyTeam network covers every corner of the world, at least those where you might want to go. While Delta has a very good business class product called Delta One, there can be very compelling reasons to use SkyMiles on Delta’s partner airlines instead due to availability or scheduling convenience.

Here are some guidelines.

Note: Delta doesn’t publish award charts, so all saver rates presented here are only a point of reference. 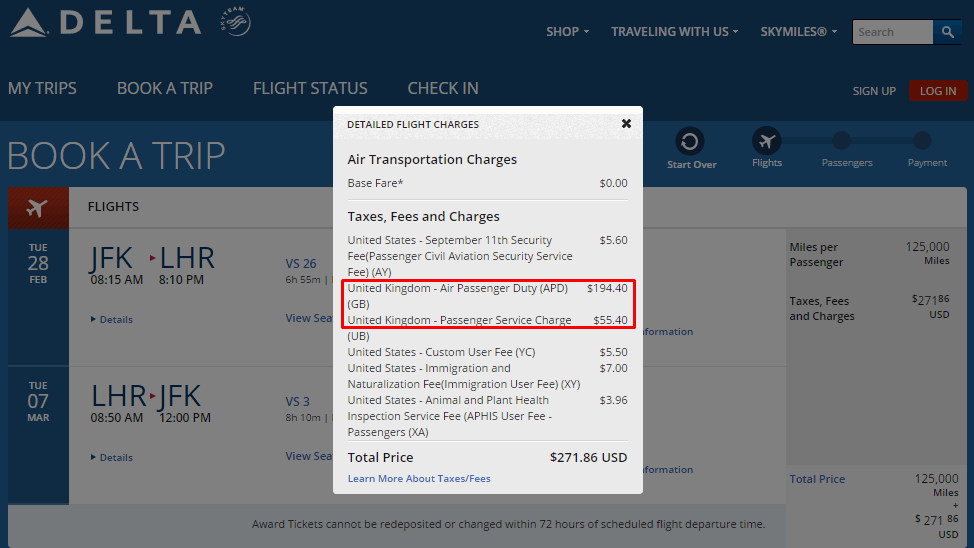 The airport taxes won’t be nearly as bad if you continue your travel to Europe rather than return back to the U.S., but if you want to avoid London and its taxes all together, you have a few options. Air France availability is not too hard to find, but not all their aircraft are equipped with true lie-flat seats, though Air France’s angle-flat seats are very comfortable.

Other options for European travel include Alitalia (mostly lie-flat seats on A330) via Rome; KLM (hard to find availability) via Amsterdam; and Aeroflot via Moscow. While Delta adds considerable fuel surcharges to Aeroflot (over $200 one way), it’s often a convenient connection, especially for Eastern European destinations. In addition, Aeroflot is probably the only carrier with a proper business class cabin in Europe. Most European airlines just block the middle seat.

Delta’s Asia and Pacific partner airlines flying to and from the U.S. include Korean, China Airlines, China Eastern, China Southern, XiamenAir (starts flying to Seattle on 9/16/16), and Virgin Australia. Korean usually has great availability, there are no surcharges, and its business class cabin on A380 is solid with good service and food. However, its business class cabin is just one huge open space that lacks any modicum of privacy.

In contrast, Taipei-based China Airlines flies reverse herringbone seats on its 777s, which might be the best business class design in the world. There are no surcharges either, but availability is harder to find. As to China Eastern and China Southern, they do get small to moderate fuel surcharges added to their award tickets.

Redeeming Delta miles for Virgin Australia business class awards used to be a great deal, but Delta has raised the level from 80,000 to 100,000 miles for travel after October 1, 2016.

You can fly to South America with Aeromexico and Aerolineas Argentinas. The good news is Delta doesn’t add fuel surcharges to either of them. The bad news is that Delta is increasing the saver award level to southern South America from 62,500 to 75,000 one way after October 1.

It doesn’t usually make much sense to fly business class unless you have a long flight. The three most popular and far away destinations in South America that warrant paying that much are Argentina, Chile, and Brazil, but Delta rarely makes partner awards available to Brazil.

Best and only availability: Aeromexico

Another issue is that it’s extremely difficult to get a business class award seat on Aerolineas Argentinas. So, if you’re not flying on Delta, you will travel on Aeromexico with connection in Mexico City. Aeromexico flies 787 Dreamliners to both Buenos Aires and Santiago, although on the flight between the U.S. and Mexico City you will likely find yourself in an old recliner seat.

Here is availability from New York to Buenos Aires. Note that not a single date is available on Aerolineas Argentinas. All availability below is on Delta and Aeromexico. 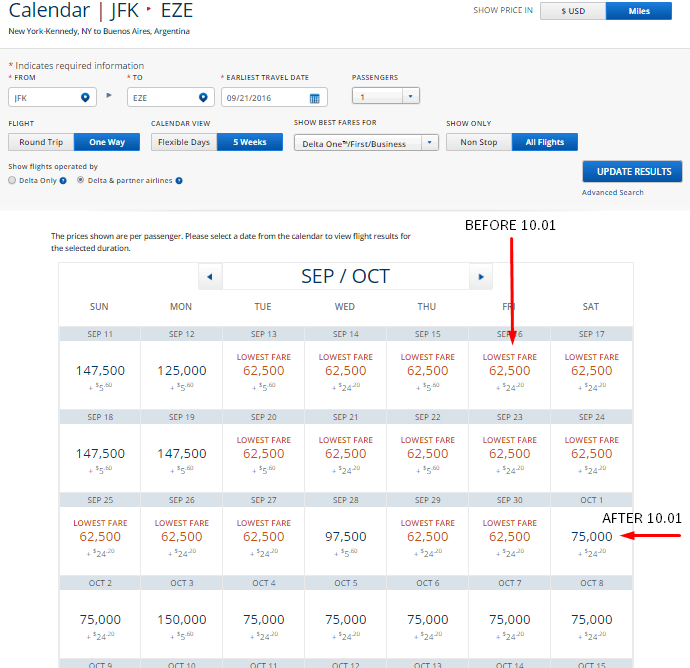 In the case of Santiago, Chile, Delta hasn’t published a 5-week schedule around October 1 yet, but the trend is clearly the same.

Bottom line: Despite recent devaluation and removal of the SkyMiles award chart, Delta miles are still valuable for booking business class SkyTeam partner awards before October 1. After that, try to use other programs to fly to Australia and southern South America, as the new rates are obviously excessive.