Cash + Points: When Are They the Best Redemption?

While Delta’s recent announcements of their sweeping award program changes have caused an uproar among frequent flyers, one of the areas most likely to trip up leisure travelers are the airline’s new cash plus points awards.

On the surface, it looks like there are two types of cash plus points redemptions:

But the reality is, the two main types of cash plus points redemptions are:

Deltas fall into the latter category one of the reasons frequent flyers are in such a stink about the changes but lets dig a little deeper.

When Should You Use Cash Plus Points 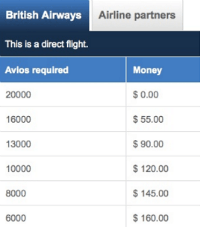 Like my favorite trick for when I don’t quite have enough points with the Chase Ultimate Rewards, that allows you to take advantage of award ticket pricing even when you don’t have points, cash plus points rates are great for those moments when a full fare ticket is way more than you’re willing to pay.

British Airways has offered an Avios & Money option for some time that actually give you a set of options between full points price and half points price of different ways you can pay a mix of cash and points:

You end up paying between 1.4 and 1.1 cents per mile, which is not bad, and a respectable rate for redeeming miles for flights in the first place.

Interestingly, the middle of the chart, Category 4 hotels one of the most frequently booked have the lowest redemption rate. The rate is 1.8 cents per points at high end hotels.

Cash Plus Points Redemptions to Avoid

When redeeming air travel awards, you always want to aim to get a value of at least 1 cent per mile in relation to the true ticket price, or you’re better off paying cash.

With the Delta awards, though, things are a little trickier. It might look like you are getting a decent value for your miles compared to the cash price of a flight, but you’re getting a bad rate compared to how Delta typically values miles.

The morale of the story?

Cash plus points awards can be great to help in a pinch or even serve as a way to essentially buy additional points when you need them at an advantageous rate.

But not always. Price out the cents per point value of any cash plus points fare against both standard cash fares and full points fares before you book to make sure its a good deal.