Capital One Venture is adding JetBlue as a transfer partner 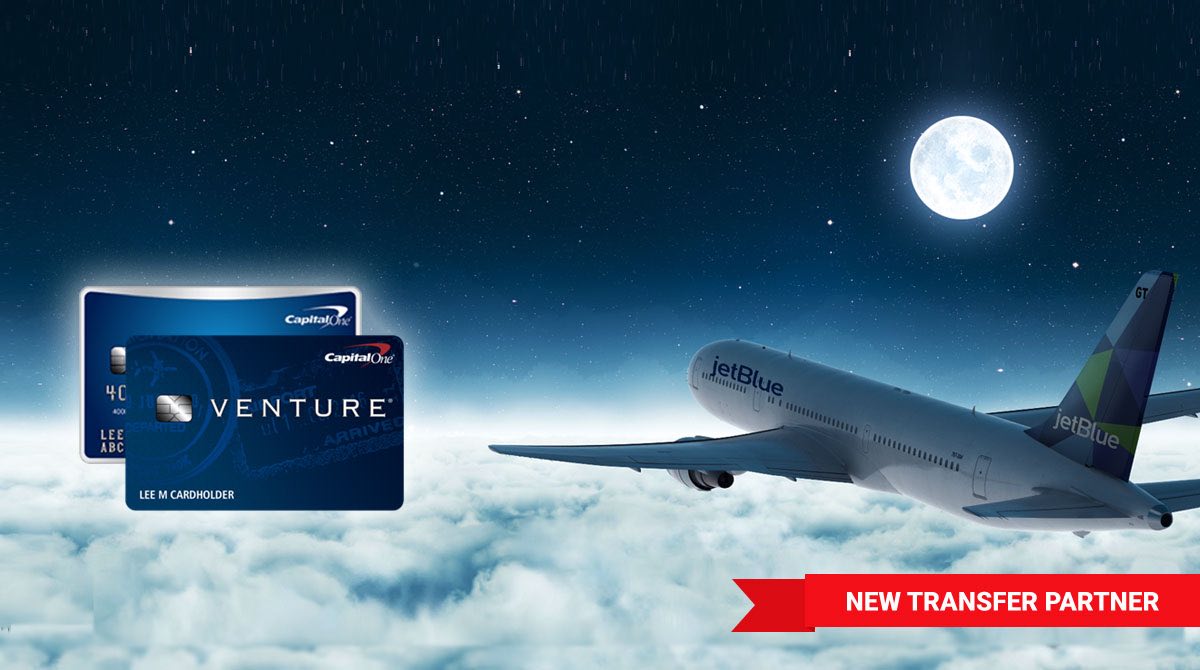 Capital One is strengthening its credit card rewards program by adding a popular United States-based airline to its growing roster of transfer partners: JetBlue.

Who are the 15 Capital One Venture Airline Transfer Partners?

This marks the 15th airline to be added to Capital One’s network of transfer partners. Prior to JetBlue, the other 14 airlines in the network were international carriers, such as Aeromexico, Air Canada, Air France, Avianca, Alitalia, Cathay Pacific, Etihad Airways, Emirates, EVA Air, Finnair, Hainan Airlines, Qantas and Singapore Airlines. JetBlue is the sole U.S. carrier in the network, at least for right now.

How to Get 50% Transfer Bonus from Capital One Venture

To encourage users to transfer Capital One points to JetBlue, the company is offering a promotional 50% bonus for points transferred until May 31. That increases the ratio to 2:1.5.

Keep in mind, the Capital One Venture card already offers 2x miles for every dollar spent on the card. That means $1,000 charged on the card equates to 2,000 airline miles.

While at first sight, you would need to transfer more to get JetBlue miles, Capital One’s earning of 2 miles for every dollar spent evens this out.

Now that we’ve covered the ins and outs of the transfer program, let’s take a look at the nearest competitor – Chase Sapphire Preferred and see how it stacks up.

With Chase, users will earn 60,000 points, but there’s a catch. Users must spend a greater $4,000 within the first three months. For Chase, those 60,000 points equate to $750 worth of airfare or hotel value when redeemed through Chase’s rewards points platform.

However, Capital One Venture offers a $100 credit towards TSA Precheck and Global Entry. These programs allow travelers to pass through airport security at a faster pace. Both cards charge annual fees of $95, but Capital One’s is waived for the first year.

This means the Capital One Ventures card gives you a better chance of amassing a higher number of points.

Depending on your spending habits, the wider variety of point accumulation with Capital One may outweigh Chase’s more favorable point transfer ratio to JetBlue. When selecting a credit card, it’s important to view the entire picture instead of one single perk that a card may offer.

Say you wanted to fly from New York’s John F. Kennedy International Airport to Boston’s Logan International Airport. A direct round-trip flight could cost about $166 plus another $41 in taxes and fees for a total of roughly $207. If you pay for the flight using the Capital One Venture card, you could cover this $207 cost by redeeming 20,700 Capital One Venture points.

If you were to book this same flight through JetBlue using TrueBlue points, it would cost 13,800 points plus roughly $11 in taxes and fees. To receive 13,800 TrueBlue points, you would need to transfer 18,400 Capital One Venture points. This is with the promotional bonus Capital One is offering — a 2:1.5 ratio.

So in this case, it’s more cost-effective, or should we say points-effective, to transfer the points from Capital One to JetBlue’s TrueBlue program.

To sum up, Capital One is taking an important step by incorporating a major United States carrier into their growing roster of transfer partners. JetBlue is currently undertaking a significant expansion and plans to open up new routes between the United States and Europe. The airline has previously never flown transatlantic routes.

The promotional bonus that runs through May 31 when transferring Capital One points to JetBlue’s TrueBlue program is attractive. However, it makes sense to run the numbers to see if you are better off paying for your JetBlue ticket using your Capital One credit card (and not JetBlue TrueBlue points) and covering that ticket with Capital One miles instead. You may find this route is more cost effective when the JetBlue/Capital One promotional bonus ends.