If you’re expecting your financial situation to change for the better this year, you’re in good company. In a survey conducted in December, LendingTree, a leading online loan marketplace, found that 67 percent of Americans expect their finances to improve in 2018. RewardExpert recently spoke with Lending Tree’s Vice President of Research, Brian Karimzad, about the survey results. 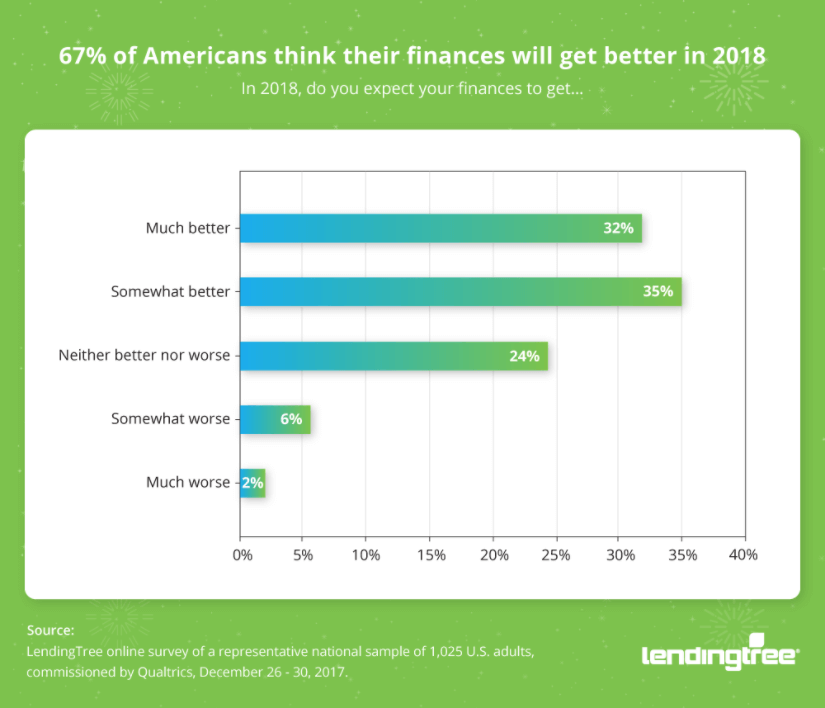 What’s the source of their optimism?  The cause is likely last year’s economic track record, according to Karimzad.

“It was an outstanding year for the economy,” he explained. “Growth accelerated, wages accelerated, and unemployment fell nearly to the lows seen in previous cycles. People were feeling very good about how they did in 2017 and felt it would continue into 2018.”

The survey also revealed that most Americans still have some financial concerns. In fact, only 5 percent stated that they are financially worry-free. The most common concerns identified by respondents included unexpected expenses (43 percent), making ends meet (34 percent) and healthcare costs (29 percent).

Paying Down Debt is a Priority for Many

The LendingTree survey also found that debt is a major financial focus for many Americans this year. When asked what they’d do if they received a $10,000 windfall, 36 percent of the survey respondents stated that paying down debt would be their top priority. In fact, debt repayment was a significantly more common choice than investing (14 percent), spending on family (12 percent), home improvement (10 percent) and saving for retirement (8 percent). 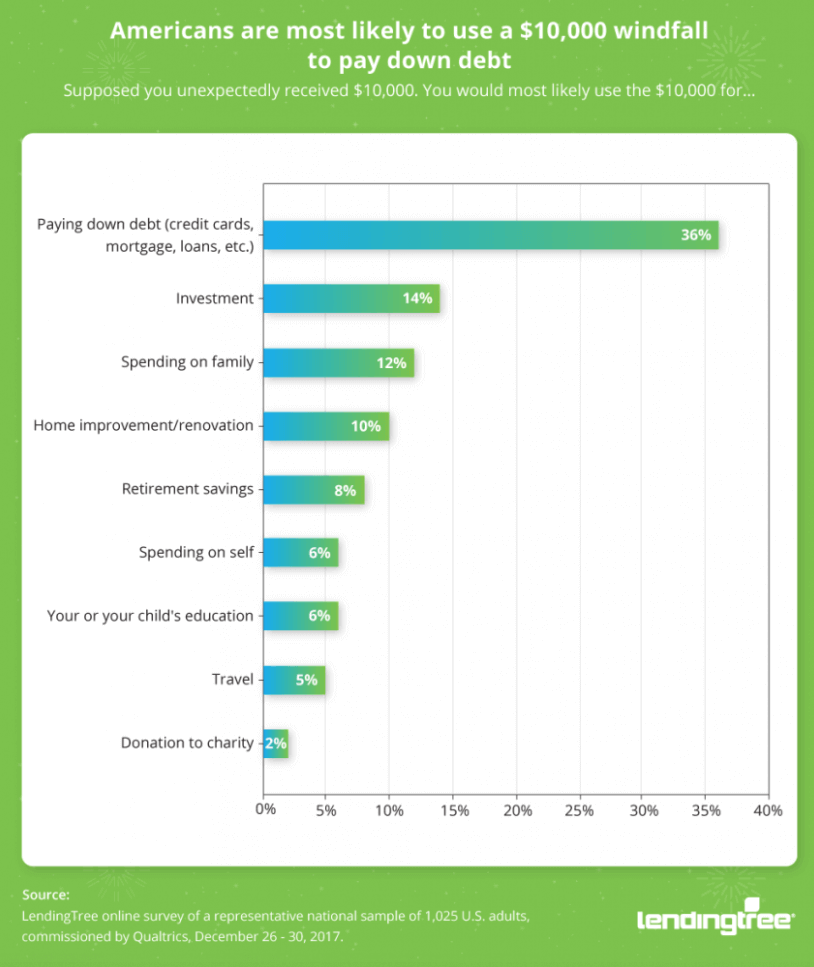 Additionally, the survey results showed that 31 percent of Americans are most optimistic about paying down debt in 2018. Other sources of optimism included controlling spending (27 percent), receiving a raise (19 percent), and getting a new job (17 percent).

“I think more people are understanding that what you pay on debt doesn’t help you get ahead, particularly the interest payments. Something like 40 percent of Americans are carrying high-interest credit card debt month-to-month. But they’re wise to the fact that if they’re in that situation, the best thing they can do is reduce the balance so that they aren’t paying interest that is getting them nowhere.”

Karimzad said the optimism from the survey respondents is encouraging. “I think it shows that people are really motivated and willing to buckle down and make a few sacrifices to lower their interest payments,” he said.

Changing Your Mindset from Spending to Saving

While paying down debt is important, so is saving for unexpected expenses. Though the LendingTree survey revealed that 95 percent of Americans are reviewing their finances at least once a month, and as often as every day for nearly a third (30%), studies have found that the majority don’t have enough savings to cover even a $500 emergency. 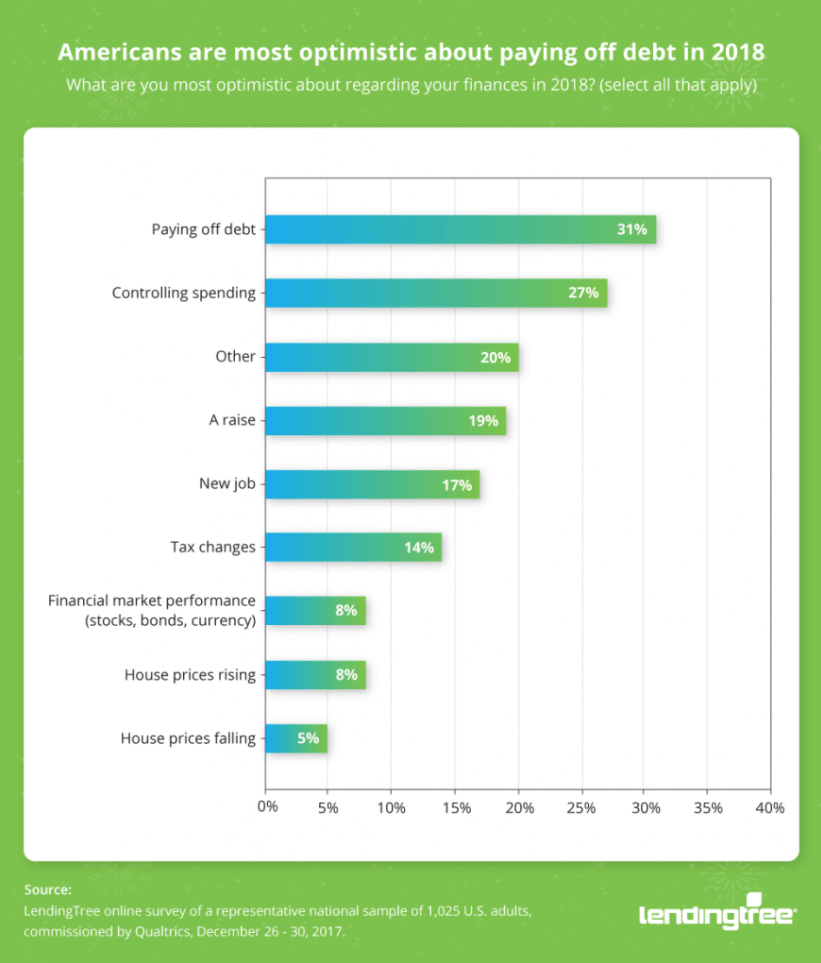 After paying bills and covering other basic living expenses, Karimzad said too many people see the money remaining in their bank account as a reason to splurge.

“They look at their balance and think, ‘Oh, I can spend that tonight because I get paid tomorrow,’” he explained. “That’s a big part of the issue. They need to step back and take a look at their spending on a two- or three-month basis, add up what all that spending is really costing them, and how much they could have saved. That’s when they’ll start to change their mindset.”

He suggests examining your budget, setting a savings goal, looking for areas where you can trim your expenses, such as interest on revolving and other debt, and allocating more of your paycheck upfront to emergency savings.

“Shopping around for a better interest rate is one of the best things you can do to ensure you’re using your good credit to minimize the interest you’re paying while you’re paying down your debts,” Karimzad noted. “That will help the repayment process go faster, and LendingTree is a great place to compare and let lenders compete for your business.”