Improve Your Brand’s Performance with Insight from J.D. Power

As a consumer, you’ve probably heard of J.D. Power  and J.D. Power ratings. Millions of Americans have considered the company’s ratings, reviews and awards when shopping for a new car or truck. But did you know that J.D. Power is also in the business of helping brands improve their customer satisfaction and company profitability?

RewardExpert recently spoke with Mike Taylor, practice lead for travel at J.D. Power, about the company’s solutions and how they can help any business owner
improve quality, engagement and brand performance. 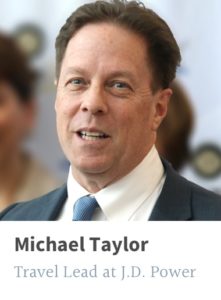 The J.D. Power company was founded in 1968 by James David Power III. “He’s a real person and a super nice guy,” Taylor said. “He wanted to provide the market with unbiased research, not data that had been tortured until it said the right things. And because he was a car guy, he started off with the automobile industry.”

Today, J.D. Power conducts studies on businesses, products and services across a range of industries from automobiles and electronics to insurance, healthcare and travel. To do so, the company employs a team of more than 800 professional analysts, statisticians, economists, consultants and experts in demographics and consumer behavior in 18 offices around the globe.

Taylor said that the J.D. Power philosophy is at the core of the company’s data-driven solutions.

“We look at any experience –whether it be a travel experience, buying a car, purchasing insurance or going out to eat– and break it down into its composite parts,” he explained. “Certain parts of the experience are more important to a customer than others, so we use regression and factor analysis to give heavier weight to those things.”

Through analyzing these experiences, the J.D. Power team creates an insightful set of data that is not only useful to consumers who want to make the best travel choices but also to the airline itself. “This allows our clients to concentrate on improvements in the areas that are most important,” Taylor noted.

“Our clients use J.D. Power solutions to understand the priorities of their customers,” he continued. “What is it that drives the decision to choose one service over another or one product over another? How can I design my product or service to best meet those needs? Those are questions we can answer.”

In August 2018, J.D. Power released the results of its Airline Loyalty Program Satisfaction Study, in which the top three ranked programs were JetBlue Airways TrueBlue (satisfaction score of 812 out of a possible 1,000), Southwest Airlines Rapid Rewards (798) and Alaska Airlines Mileage Plan (791).

“One of the interesting things we found out through this study is that one of the key variables for airline loyalty programs is how well the loyalty club member understands it,” Taylor said. “Does he or she understand how to redeem points? The higher the percentage of members who said they know how the program works, the higher the overall satisfaction with the program.”

Taylor said that J.D. Power also found that loyalty program satisfaction increases the more a member engages with the program. “Driving interaction is a big trend for airline loyalty programs right now,” he explained. “Airlines can do that by letting members redeem points for things other than airline travel, like a meal or an Uber or Lyft ride. People who do that are more satisfied with their airline loyalty program.”

“There has never been a more satisfying time to travel than right now,” Taylor commented. “Airlines have actually done a great job keeping relative costs down over the years and the aircraft have gotten better.”

Taylor also noted that airlines are having a positive effect on the airport experience. “They have a great deal of influence over how much an airport spends on capital improvements,” he said. “Airlines are making money right now, so you’re seeing very large improvement projects in Atlanta, at O’Hare, at LaGuardia and, very soon, LAX. That’s going to be the largest public works project in the history of California.”

Taylor said that choosing the best apps to improve your travel experience is going to become easier in March when J.D. Power releases a study on hotel, airline, rental car and online travel agency apps.

“We’re looking at not only how satisfied people are with these apps but also how they react to the graphics, layout and logic of the particular platforms,” Taylor said. “We’re releasing the report on March 28 and will be awarding trophies to the winners at a digital travel conference in Indian Wells, California, in early April.”