The internet can be a dangerous place. Software developers and website creators are under constant attack from hackers, malware, and viruses. If they’re not careful, a project can be interrupted by these bad actors. StackPath provides a secure environment from Day 1 that allows developers to create without worry. And as a way of paying it forward, StackPath’s Propel program offers services, guidance, and networking opportunities free of charge to selected startups.

I had the opportunity to speak with James Leaverton, Vice President of StackPath’s Ecosystems program, to discuss how secure edge services enable developers to protect, accelerate, and innovate cloud properties.

Why Was StackPath Started? 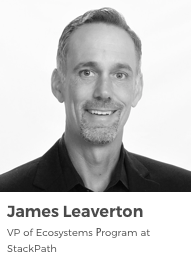 James’ co-founder Lance Crosby was originally part of a company named SoftLayer. It was one of the first cloud companies before people were actually calling it “the cloud.” SoftLayer sold to IBM in 2013 and is now part of the IBM Cloud service that you may have heard of.

While Lance was at IBM, he noticed that there was a big gap in security when it comes to the cloud. Being the entrepreneur that he is, he realized that there’s a need for security and that he could create a company to plug this gap.

James and Lance attended security conferences and networked with industry colleagues to ask “what keeps you up at night?” They expected answers focusing on hackers, organized crime, and rogue states. Instead, the biggest headache was the internal developers. Their intense focus on developing took away from their focus on security. With the cloud, developers can easily publish code, designs, and software to the web without the necessary security.

The idea of StackPath was formed in 2015 as a way to build a secure development environment where security was automatically integrated, rather than an add-on after the fact.

Starting a business is tough, especially when you don’t have funding. StackPath understands the needs of entrepreneur and early-stage companies, so they created the StackPath Propel program to help foster the next generation of technology companies.

All of these benefits are offered for free, with no strings attached.

StackPath hopes that these companies become vastly successful and stay on as paying customers after the twelve months are over. If the startup doesn’t succeed, it is possible that the employees will go on to other startups or established companies and will implement StackPath’s products, like the Edge secure developer environment.

A similar program was offered by SoftLayer before it was sold to IBM. Their program was named Catalyst. The startup offered a text messaging platform via an app. This company ended up being WhatsApp, which is now an incredibly popular application for the world to communicate.

In a matter of months, WhatsApp went from a small customer receiving a free account to one of SoftLayer’s largest customers. A short time later they were acquired by Facebook for $19 billion. And now Facebook becomes a customer.

Pay It Forward and Plant Seeds

Not every Catalyst or Propel client will be this successful, but this is an example of how powerful it can be to pay it forward and plant seeds for future customers.

Over the last two decades, an incredible number of new companies and technologies have changed our lives forever. Just think of all of the new companies that impact your daily life that weren’t yet created in 2000 – Facebook, Google, and Uber, to name a few.

With so many new companies experiencing tremendous growth, it is said that the S&P 500 will have a 50 percent turnover in the next few years. If businesses are not planting the seeds of future customers, they could experience a rapid decline in their revenues as emergent technologies kill off or significantly reduce existing companies.

Even if these startups never become paying customers, StackPath believes that providing these opportunities is the right thing to do.

What Other Products Does StackPath Offer?

In StackPath’s short lifespan, they have grown considerably. In a matter of a few years, they have acquired multiple companies, such as:

Additionally, StackPath has support teams in Belgrade, Serbia and Manilla, Philippines. With headquarters in Dallas, Texas and large offices in Florida, London, and Tel Aviv, StackPath is truly a global company with over 400 employees.

Why Is VPN So Important?

One of the other benefits of VPN software is being able to access entertainment services and other websites from anywhere in the world. Subscription services like Netflix may restrict the shows that you can watch or download based on the country you are in. With VPN software, you can choose the location of your connection to gain access to this content. For example, if you’re traveling to Mexico for a beach vacation and want to watch a Netflix show before bed, you can choose a VPN location within the United States so that Netflix allows you to watch your favorite shows.

Follow these links if you would like to learn more about StackPath’s security-first developer environment, StackPath’s Propel Program, or their Encrypt.Me VPN services.