RewardExpert examined airline on-time performance statistics over the five-year period from 2012 to 2017 to determine the best and worst days to travel and the airports and airlines to avoid over the Labor Day travel period.

Delayed flights, cancelled flights, flights that wind up being diverted: these are but a few of the everyday travel hassles that can become so much worse during peak holiday travel periods. While most of us experience congestion on highways during Labor Day, those flying have it no better. For those taking to the skies for Labor Day this year, this forecast examines the track record of airlines and airports over the past five years to see which days and places, and on whose planes, you’re most likely to get to your destination without undue delays.

RewardExpert analyzed Department of Transportation flight data from the past five years to determine on-time performance averages and trends for airlines and airports, and to predict which days are—historically speaking—most likely to be delay and hassle free, and which days to avoid traveling, if at all possible. In this report, we examine the on-time performance record of the top nine domestic airlines and the 45 busiest airports in the U.S. over the Labor Day travel period. Our analysis of statistics for the last five years enables us to determine the best and worst days to travel during the eight days surrounding the holiday.

RewardExpert examined DOT flight data during the period starting on the Wednesday before Labor Day weekend and ending the following Wednesday, for a total of 8 days, from the years 2012 to 2017 to assess which days during the travel period have the best on-time performance. We also made reference to our previously calculated on-time performance averages for the five-year period from 2011 to 2016 to better view longer term trends. 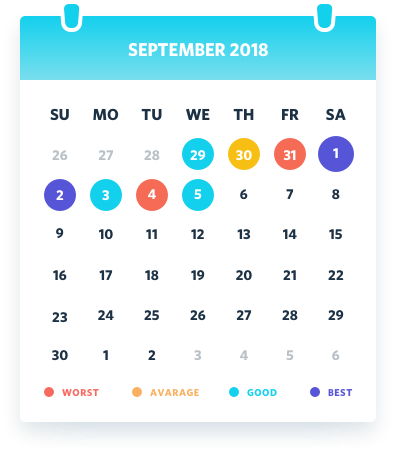 The Busiest, Best, and Worst Airports for On-Time Performance

RewardExpert examined DOT data to determined the on-time performance for 45 major airports. The table below presents average number of arrival and departure flights during the travel period by domestic airports, the percentage of flights that were on time by airport during the travel period, and historical trends over the last five years. 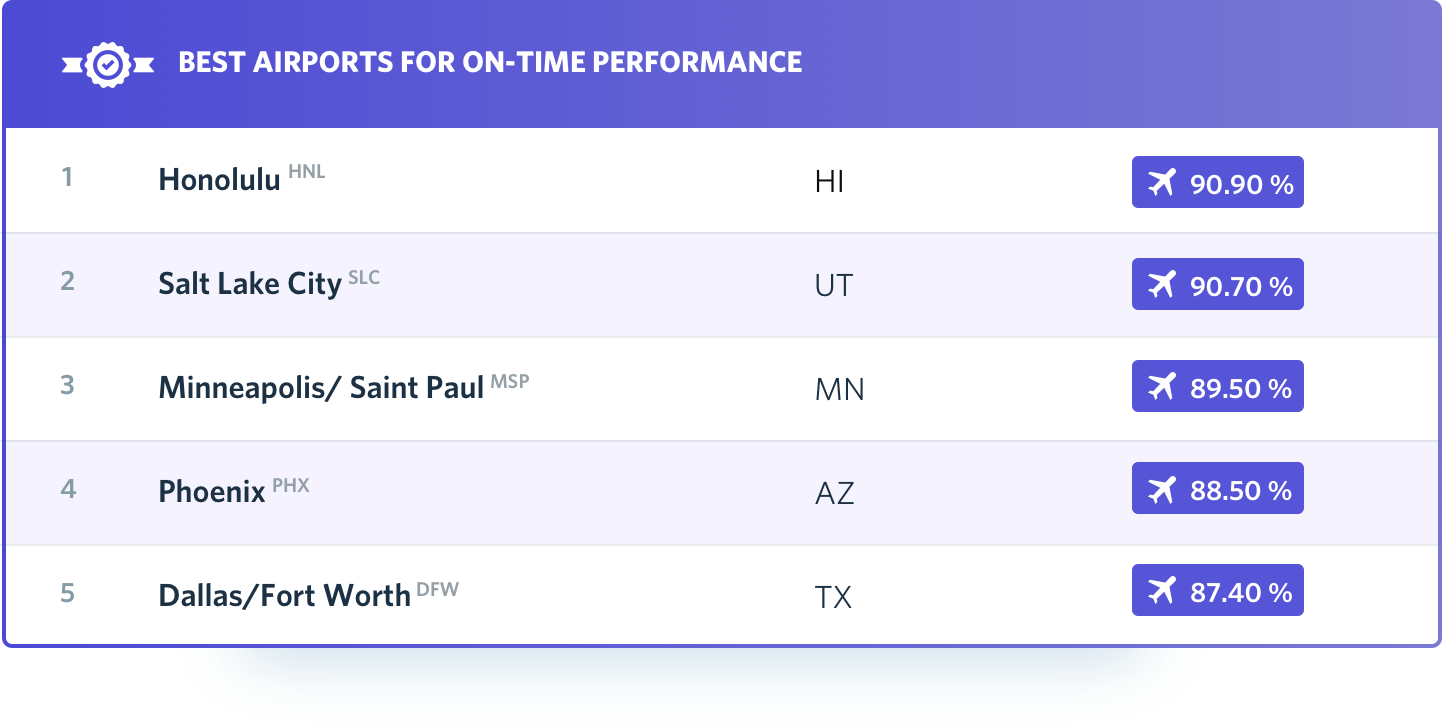 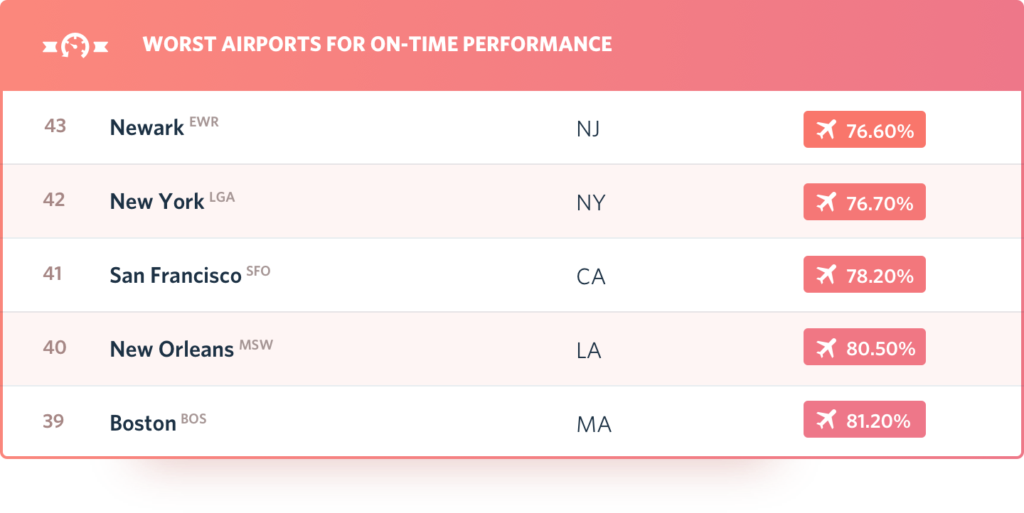 CLICK HERE FOR THE FULL RANKING OF ALL 45 AIRPORTS

RewardExpert examined DOT data to determine the on-time performance of major U.S. airlines. This list displays the percentage of flights by airline that were on-time or delayed by less than 15 minutes during the Labor Day travel period.

How to Make Your Labor Day Vacation Better

Getting the right credit card can really make traveling—particularly by air—a lot more comfortable. Whether you’re stuck in an airport, renting a car or booking a hotel, a premium credit card can make everything go more smoothly and, believe it or not, save you a lot of money.

You should consider getting one of these cards before you embark on your Labor Day getaway.

Relax in an Airport Lounge

Unfortunately, long layovers and unexpected delays are an everyday occurrence even if you fly just a few times a year. That’s particularly true if your vacations are planned around holidays and long weekends, like Labor Day.

While it’s impossible to avoid these problems, getting complimentary access to an airport lounge can really make your life easier. Not only will you avoid the hustle and bustle of a busy airport gate, but you’ll have access to complimentary food and drinks, not to mention TV, Wi-Fi and other amenities.

While there are a number of great cards, like the Chase Sapphire Reserve and Citi ThankYou Prestige, that offer free access to a 1,000+ lounges in the Priority Pass network, the Platinum card from American Express is perhaps the best premium card on the market for airport lounges.

That’s because you’ll be able to get into Amex’s swanky Centurion Lounges. Chef-created meals and top-shelf cocktails compliment a whole host of comforts. Depending on the location, you can enjoy free spa treatments, wine bars, family rooms, showers and more.

Get Elite Status and More

All of premium travel cards offer complimentary elite status and other perks with a variety of hotels and rental car agencies. The Platinum card, for instance, gives you Gold status with Starwood and Hilton, and the Sapphire Reserve gives you special privileges with National, Avis and Silvercar.

In addition to a variety of travel credits, such as the Citi Prestige’s Airline Fee credit that covers up to $250 in baggage charges and other fees, all of these cards will reimburse you for the cost of TSA PreCheck or Global Entry. You’ll be zipping through security, with your shoes on!

Save a Ton of Cash

Not only will these cards make your travels easier and more comfortable, they can also save you a lot of money. You’ll get all sorts of valuable travel credits with any of these cards, plus they all earn rewards that can be used for free travel.

With the Sapphire Reserve, for example, you’ll get triple points for travel and dining expenses and one point per dollar for all other purchases. With the Sapphire, you can either transfer those points directly to frequent flyer programs or redeem at a rate of 1.5 cents per point via the Chase Ultimate Rewards website for airfare, hotels and rental cars.

You’ll be traveling for free—and in comfort—in no time. So what’s stopping you from getting a premium travel card?

On-Time Evaluation: A flight is considered on time if it takes off or lands within 15 minutes after the scheduled time shown in the carriers’ reservations system. The data assesses both arrivals and departures taking into account gate-to-takeoff times and landing-to-gate times.