When Does Your Rewards
Credit Card Start Paying for Itself?

During the past year, the roll out of huge credit card sign-up bonuses and lucrative reward programs have made high-fee luxury cards increasingly appealing. Even budget-conscious Millennials are jumping on the gravy train, as seen with their unprecedented interest in the pricey Chase Sapphire Reserve, which came out last summer and costs $450. In fact, a study from R.K. Hammer notes that income from credit card fees has risen in recent years, which means there’s an increased interest among consumers in these cards.

But while cards with big sign-up bonuses offer great value initially, often cancelling out any annual fees in the first year, card holders need to consider their long term value. For example, all those people who signed up for the Chase Sapphire Reserve last summer will have to justify paying the hefty $450 annual fee for the second year when it’s no longer counterbalanced by a sign-up bonus. All of which begs the question:

“… at what point during the second year will consumers actually break-even on the cost of owning a luxury card and truly start earning and enjoying rewards?” – RewardExpert set out to answer that question.

We used a combination of government sources and credit cards rewards data to determine which cards are best for consumers based on an individual’s spending habits and monthly charges, starting from $500 to $5,000 per month. Our data accounts for the value of various benefits included with certain cards, such as lounge access and travel credits, to provide a complete picture of a card’s full value. This report focuses some of the major rewards cards on the market that charge an annual fee. 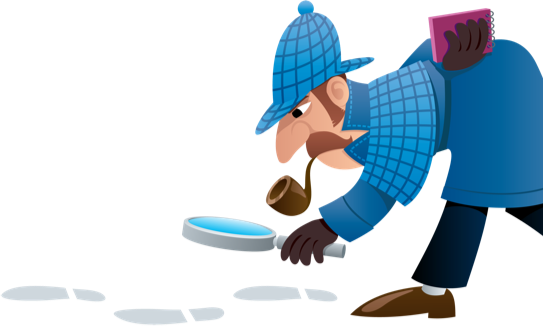 To help you navigate this report, we’ve compiled a glossary of terms detailing relevant phrases used throughout our findings:

Clean bonus: The total value of reward points or miles earned on a card in a given year minus the card’s annual fee.

Break-even value: The amount of money that must be spent in order to reach the break-even point level.

Break-even point level: The total number of reward points or miles that need to be earned in order to match the annual fee.

Break-even months: The total number of months it would take to reach the break-even value.

This card has an average break-even value of $18,321, which is a whopping 157.8% higher than Chase Sapphire Reserve and 62.5% more than Citi Prestige. The recently announced yearly Uber credit of $200 may be enticing to many consumers, but it remains the luxury card with the highest break-even point on average.

The newest Visa Infinite card boasts an incredible average break-even value of $3,803 across all spending levels. Its $400 annual fee clocks in lower than any other card in the luxury segment. Plus the $325 travel credit essentially brings down the annual fee to $75 – lower than any other luxury card. Those spending as low as $1,000 per month can get their money’s worth in just 12 weeks. The triple points back on all mobile wallet purchases also gives an added advantage for tech-savvy buyers.

Most luxury cards are unapproachable for those in lower spending levels, but the Altitude card breaks the mold, which gives it a distinct advantage. The lower annual fee puts it in a class of its own, leaving the other three luxury cards to jockey with one another for second place in value. That said, the drawbacks with this card is that it is only available to current US Bank customers and, when it comes to redeeming rewards, Altitude cardholders can’t transfer rewards to airlines or hotel partners and are required to use the bank’s rewards portal.

At $7,105 the Chase Sapphire Reserve card has the second-lowest break-even point of any luxury card, no matter the cardholder’s spending level. The triple point-back earnings on airfare, hotels and dining give it a distinct miles and points value advantage over the Platinum and Prestige cards and puts it on the same level as the Altitude Reserve. The Reserve’s most notable advantage over the Altitude is its flexibility in redeeming rewards through multiple airline and hotel transfer partners.

Despite being a high-value card, if you’re spending under $2,000, reconsider the Reserve. It would take more than seven months to start earning rewards on this card for those only putting $1000 per month on it.

— “Not as pricey as Platinum and not as valuable as Sapphire”

The Prestige’s average break-even value comes in at $11,275, which is 60% lower than the American Express Platinum card. The Citi Prestige card offers triple points on hotels and airfare, which is lower than the Platinum, but it also offers double points on restaurant purchases. An average consumer spends far more dining out in a month than on hotels and airfare, which gives the Prestige a break-even advantage on the Platinum.

The Prestige offers a clean bonus of more than $400 at most spending levels and has a relatively low break-even value. For lower spenders putting less than $3,000 on their cards per month, it can take more than one-third of the year to break even.

Summary of all Luxury Credit Cards

Number of months until break-even point by spending levels:

It’s hard not to notice the value of the Altitude card in the chart. It has a much lower break-even value than any other card and has a similar trajectory to the other luxury cards, seemingly putting it in a class of its own. The same way the Platinum’s annual fee hike inflates its break-even month value, US Bank’s new card pushes it way down at every spending level. This is the only card that will provide value to the lowest spenders, begin earning in earnest after six months of purchases, and continues to be of incredible value at all levels.

This chart demonstrates how the Platinum’s $550 annual fee – $100 more than its counterparts – puts it at an incredible disadvantage. The Amex Platinum card starts at an astronomical break-even value of 36.6 months. At $500 per month, it’d take more than three years to break even on the card’s annual fee. At $5,000, it would still take 3.7 months to hit the break-even value, more than any other card.

The $450 annual fee places the Citi Prestige’s break-even month figures closer to the Reserve’s ballpark than the Platinum’s. At a $500 spending level per month, it would take nearly two years to break even, but that drops to just 4.5 months when spending $2,500 per month. The Chase Sapphire Reserve outpaces the Citi Prestige across the board. Sapphire’s break-even month values are nearly 60% lower than Prestige’s counterparts and less than half that of the American Express Platinum. 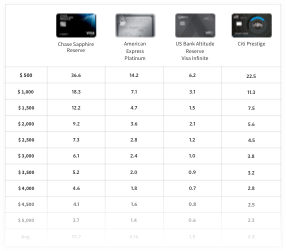 At $59 per year the CapitalOne Venture has the lowest annual fee of any card in the category. Consumers get the bulk of the benefit from this low price. Even for someone spending just $1,000 per month, it would only take three months to break-even. For anyone spending more than $3,000 per month, it takes only one month.

The Venture is also an extraordinarily well-balanced card. Consumers earn double rewards on airfare, hotels, dining, gas, groceries and other spending. Buyers of all stripes can earn value from the Venture card – even the budget-conscious.

— “A solid deal for travelers only”

It takes 8.9 months to break-even using a BarclayCard and spending about $500 per month, which is about 50% higher than the Venture card. The card becomes much more of a value for consumers spending more than $1,500, at which point a cardholder only needs three months to break-even.

— “Unprecedented value for a lower-fee”

The average break-even value for the Sapphire Preferred is slightly more than $7,000. This is the highest of all of the lower-fee cards. It’s more than twice the break-even value of the Venture card and $2,500 dollars more than Barclaycard. The $95 annual fee is the highest among the three cards and the Sapphire Preferred doesn’t offer the double value on gas, grocery and other purchases that its counterparts do.

What this card does offer, is flexibility and value. It doles out an average clean bonus of $1,069 in the first year and $348 in the second year, with double value for airfare, hotels and dining purchases. Most importantly, the rewards garnered from this card can be used whichever way the cardholder sees fit. The other two are miles cards specifically. Chase Sapphire Preferred cardholders have to pay more to break even, but they’re given an unmatched level of flexibility in cashing in on these rewards.

Summary of all Lower-Fee Credit Cards

Number of months until break-even point by spending levels:

The average consumer gets solid value from the CapitalOne Venture card. Its low annual fee also makes it immediately valuable for consumers, even at the lowest spending level. Compared to the other lower-fee cards, it's certainly the best value.

The more than 50% annual premium on the Barclaycard relative to the Venture makes its break-even value higher across the board. The Sapphire Preferred is certainly the most expensive. With a $500 monthly spending level, it would take more than a year to break-even on the card’s $95 fee.

We started by tallying up all of the reward bonuses for each card. The point value for each was gathered in purchasing categories, including value on airfare, hotels, restaurants, gas, groceries and general spending. Data was also collected and compared for additional card benefits, such as airline lounge access and baggage fee credits. The sign-up bonus and minimum spend limit were also gathered for each card.

Secondly, the Bureau of Labor Statistics’ (BLS) most recent Consumer Expenditure Survey, Travel Spotlight and Travel Expenditures documents were used to gather spending figures. These surveys provided average expenditure data on spending categories such as groceries, dining and gas for all US consumers. Average travel spending data was gathered from the BLS’ travel-specific sites, and corroborated with Bureau of Economic Analysis data. From there, an average expenditure figure was aggregated with the BLS data. This average data was used to determine the average consumers’ expenditures on dining, gas, groceries, hotels, airfare and other.

Thirdly, these figures were prorated to meet different spending levels per month, at $500 intervals from $500 to $5000. These amounts were plugged into an algorithm that added up rewards values for each card at each spending level. A card’s miles/points value, based on the bonuses tallied in the first step, were used, in conjunction with reward points values gained from the monthly spend at the different levels, to determine how much a person must spend to earn enough rewards to meet the card’s annual fee. This figure was divided by the monthly spending figure to calculate how many months of average spending it takes to earn rewards equivalent the card’s annual fee.