RewardExpert analyzed five years of airline on-time performance statistics to determine which airlines, airports and dates are most likely to experience delays during the 2018 spring travel season.

Who doesn’t want a change of pace after the monotonous months of winter? Like clockwork and bears, wanderlust awakens in us at the very first signs of oncoming spring, and there are fortunately many vernal holidays for those of us who are not students and need a halfway decent pretext or excuse. Unlike clockwork and rather more like bears, the spring travel season can be quite unpredictable, especially as compared to travel during the weeks before and after Thanksgiving and Christmas.

RewardExpert analyzed five years’ worth of data for every day from March 1st through May 31st, to forecast delays and crowds for each day. Airport and airline performance was achieved by aggregating airport/airline on-time performance data for each month and the three month period overall. 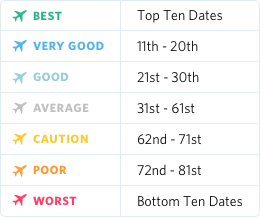 Click here to view the full airport ranking and data

Time to Take Advantage of Some Benefits

Many credit cards today offer a variety of travel benefits that few of us ever use or even realize we have. If you have found yourself delayed because of the high volume of travelers during this time of the year, check your wallet and find out if you can cash in on travel rewards.

Many cards, such as the Amex Delta Reserve card, Citi AA Executive card, and the Chase United Club card offer complimentary lounge access. This can make your longer than expected time at the airport much more comfortable.

It is frustrating to face unexpected delays when travelling. That’s why utilizing any free concierge services you may have available can be a good idea. Cards like the Capital One VentureOne Rewards card or the Citi ThankYou Premier Card can both offer 24 hour complimentary concierge services.

Insurance for trip delay or cancellation

Chase has a nice assortment of cards that will cover up to $500 per day for expenses related to your trip being delayed. The Sapphire Preferred, Sapphire Reserve, Ink Plus, and United MileagePlus cards offer this $500 allowance for each traveler, as long as you purchased the tickets using your Chase account.

Most of these travel benefits have restrictions and special conditions that apply, but they are well worth it when you need them. Be sure to take a look at what travel benefits your cards carry before you leave for your next trip.

RewardExpert analyzed on-time performance data provided by the U.S. Department of Transportation Bureau of Transportation Statistics for the months of March, April, and May. We calculated the average on-time performance figures for each date over the last five years, as well as average flight volume. We likewise calculated five-year average on-time and flight volume figures for each month at the 45 busiest airports in the U.S. and for each major airline.

Airports and airlines were evaluated over the same interval, on a monthly basis, and then ranked according to their combined average on-time performance records. Flight volume was also calculated and a ranking established for both airports and airlines. However, there was only a slight correlation between flight volume and on-time performance, and thus these figures were not combined for an overall rating.