Crowded airports and flight delays are inevitably part of anyone’s holiday travel experience. At no time is the risk of a delayed flight higher than over the Thanksgiving break. You can reduce your chances of being stuck at the airport, or on the tarmac, both by looking at the past performance of various carriers and airports, and knowing which travel days are most prone to delays.

RewardExpert analyzed Department of Transportation data published by the Bureau of Transportation Statistics over the past five years to give travelers a better idea of where and when the most delays have been reported, and which airlines are most likely to get you to your destination on-time. We rated the on-time performance of the top domestic airlines at the 45 busiest airports in the US around Thanksgiving, and determined the best and worst days to travel during the five days before and after the holiday.

The Best and Worst Days to Travel 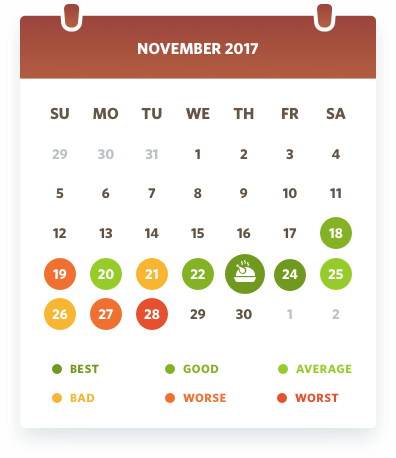 If you can leave early and stay for a while, you are least likely to encounter delays on the Saturday before the holiday. Don’t even think about Sunday, though: you’ll run into the highest rate of flight delays before the holiday if you do travel that day.

Waiting until the last minute pays off: our analysis of the data shows the lowest rates of delayed flights on Thanksgiving day.

The Tuesday before Thanksgiving is the second-worst day to fly. Surprisingly, our data shows that you are more likely to arrive on time if you wait until Wednesday. Over the past five years, an average of 84.9% of all flights on Thanksgiving Eve have been on-time.

When heading back home. it’s a good idea to skip town early on Black Friday. You’ll have the best chance of avoiding delays. Otherwise, if you don’t catch a flight on Saturday, you can expect heavy delays starting with Sunday, which will get worse before they get better.

Last year, the Monday after Thanksgiving was the worst day to fly back. This year, Tuesday is likely to be just as bad, if not worse. Flip a coin.

Hawaiian Airlines continues to have the best on-time performance record, despite a 3.8% rise in delays last Thanksgiving, with 90.9% of flights departing or arriving on-time. With an average on-time rate of 93.9%, Hawaiian Airlines stands out at the top of the pack.

Two of the three major airlines reported slight increases in delayed flights during Thanksgiving 2016, with only American Airlines reporting improvements in timely arrivals and departures. Delta still outperforms both United and American by about 5%, with 88.3% of flights on-time, compared to 82.9% for United and 82.8% for American.

Budget carriers Southwest and Frontier showed the most improvement last year, reducing delays by 1.9% and 0.85% respectively. JetBlue reported the greatest increase in delayed departures and arrivals, which increased by 5.7%. While Southwest reported on-time performance last year just behind United, at 81.4%, its average on-time rate of 80.54% still lags. The bottom line is that you may have better luck getting to your destination on time flying with a budget carrier this year, but don’t count on it.

If you’re travelling to or from Hawaii, you’re in luck: Honolulu International Airport continues to have the best on-time performance record. Over the past five years, 91.5% of all flights were on time.

Good news for Chicagoland travelers: on-time performance improved at both O’Hare and Midway over Thanksgiving 2016, with 81.3% and 83.7% of flights arriving or departing without delays (five-year averages of 79.9% and 80.4%).

RewardExpert analyzed the Bureau of Transportation Statistics monthly airline on-time performance data for the five-year period from 2011-2016, and examined the performance of nine airlines at 45 airports during the 11 day period around Thanksgiving (the five days before and after Thanksgiving). We calculated the average percentage of flights that departed and arrived on-time for each airline, airport, and day, each year. Our forecast reflects a rolling five-year average of on-time performance. On-time performance for each day was then ranked for five days before and five days after Thanksgiving to obtain the best and worst days for on-time flights. Airlines and airports likewise received ranks based on their average on-time record over the last five years during the Thanksgiving travel period.