Average Cost of Vacations by State

From travel and lodging to food and entertainment, RewardExpert breaks down just how much the average citizen of each state spends when they take domestic and international trips.

Nose-to-the-grindstone hard work is often associated with Americans, but as most of us know, we also love to kick back and take a vacation. Traveling is pretty well ingrained in American culture. The Griswolds were always taking time off to travel for National Lampoon-style vacations. Jack Kerouac drew on experiences jaunting around the U.S. to write one of the beat generation’s seminal works, On the Road. Americans are a hard-working sort, but we’ve been known to put in for a few days off and see the world or take in some of our nation’s natural splendor.

However, we might not be doing this quite as much as we used to – or even as much as we should. According to Project Time-off, Americans have been skipping their vacation days more and more over the last 15 years. As many as 55% of Americans didn’t use paid time off last year, not to mention much higher rates for unpaid days. Why aren’t people going on vacation? Project Time-off surveyed some of these vacation-starved workers and they were likely to say that they didn’t want to return to a mountain of work or that vacations just cost too much. With these trends ringing true for many people, Americans are much more judicious about their vacations nowadays. With less days away, travelers are much more selective about what they choose to put their vacation money toward.

RewardExpert set out to dive into the state American vacationing by analyzing spending figures from transportation and lodging to food and entertainment. Americans are a diverse group, so we broke down expenditures by state and by region to give you a better idea at what the average American spends on vacations and how that varies in different places in the nation.

Jump to a Region

‘The average international vacation is 561.6% costlier than its domestic counterpart’

On average, four day domestic trips cost Americans $630.00. International trips, as expected, are more expensive, but exactly how much more is pretty staggering. The average international vacation is 561.6% costlier than its domestic counterpart, at $3,538.00. These prices are per person, however, and are not directly proportionate with each additional traveler, since families typically share lodging and food costs. Adding a fourth traveler to a third-person party won’t put too much of a dent in a family’s lodging budget.

‘With such a high fixed travel cost for foreign trips, travelers tend to
spend proportionally less
on discretionary categories when they’re on international trips’

‘Food costs account for more than 25.0% of travel costs for domestic travel, and 16.2%
of trip costs for foreign travel’

Dining is a big part of vacationing. Americans spend an average $168.50 on food and drink while on domestic trips. While abroad they spend about $572.70 to eat out. That figure may be higher for international travel, but it is proportionally far less. When travelers know they have to make such huge investments in transportation and lodging costs, they scale back on dining. Food costs account for more than 25.0% of travel costs for domestic travel, and 16.2% of trip costs for foreign travel.

Minnesotans are huge travel spenders. Citizens of the Gopher State spend 24.4% more on their average vacation than residents of Indiana, the lowest-ranked state in the region. Minnesotans spend 16.1% more on vacations than the average state in the region and their dominance makes sense because it’s one of the most financially stable states in the nation. State unemployment sat at 3.8% as of April 2017, which is lower than the 4.4% national level. More Minnesotans have the resources to do more traveling and can spend more when they get there.

Midwesterners love to travel, but they pay the second-least per domestic vacation of any surveyed region. Prices across the board are lower for those in the Midwest region, which results in less spending, especially for domestic travel. The Midwestern Producer Price Index is 6.5% lower than the national level. Lastly, the region spans a large geographic region, which means it’s great for weekend getaways in the family car, which is often less costly than traveling by air.

On average, four day trips within the country cost Americans in the Midwest region $629.68. International trips for travelers from the Midwest, on average, cost $3,535.09. This average represents a spread with quite a bit of parity. Five of the 12 states have below average vacation expenditures and seven clock in above average. 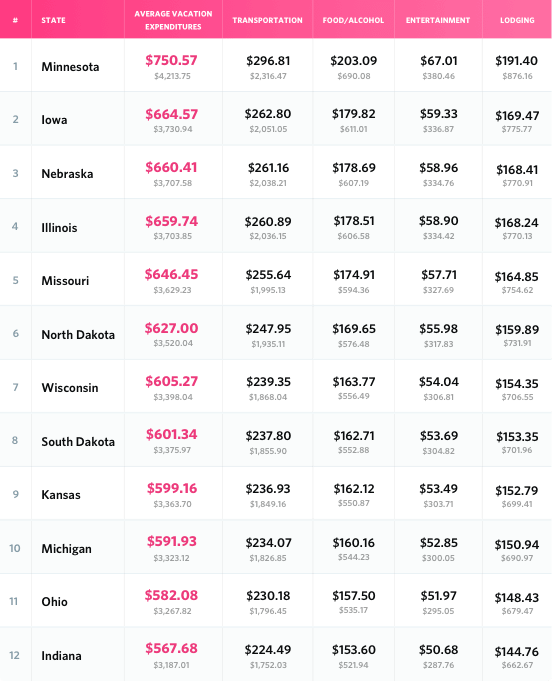 New Hampshire has the deepest pockets in the region when it comes to vacation spending, coming in at second-highest nationally. With an extremely low unemployment rate of 2.8%, and relatively high income levels, folks from New Hampshire are more likely to have the cash for travel. Hampshirites spend 32.9% more per vacation than people from Maine, which is the lowest spender in the region. When you’re already in Vacationland, you don’t need to vacay away from Maine quite as much.

Northeasterners spend roughly $250.36 on transportation for domestic trips, which is the most of all the regions. International trips are more expensive at $1,953.95. The Northeast is the furthest away from the oil-producing and importing regions in the South than any other region. This bumps up gas prices for car travel prices and a Northeasterner is more likely than any other region to travel by plane, which is far more expensive.

For domestic trips, travelers from the Northeast spend roughly $188.62 on lodging. For international trips, the average spending is $863.43 for accommodations. The proportion spent on lodging is higher for the Northeast than any other region. Cities like Boston and New York City are popular nearby vacation destinations with very high hotel costs, driving up lodging costs for regional travelers. With high transportation and lodging costs, spending on vacations in the Northeast is higher than any other region. 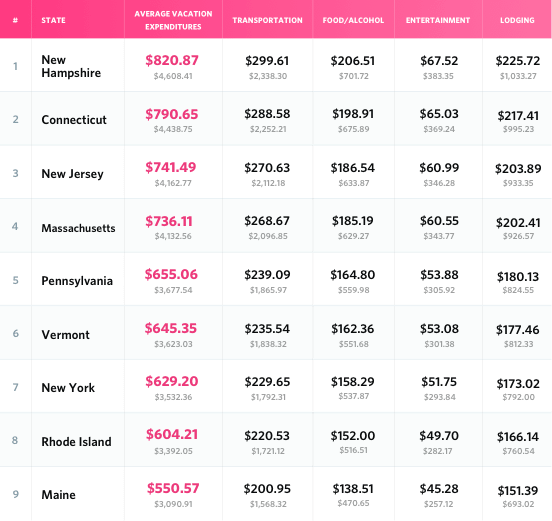 The residents of the South spend the least on vacation out of all four regions. On average, four day trips within the country cost Americans in the South region $564.51. International trips for travelers from the South cost $3,169.21, roughly. Southerners have a slightly higher savings rate than the national average, and according to the BLS, they make 7.9% less discretionary income than the national average. Essentially, Southerners make more and save less, which is unconducive to vacation spending.

The South has the largest spread for vacation spending of any of the surveyed regions. States like Mississippi and West Virginia are high poverty states, which put them toward the bottom of the regional list. Mississippi, for example, has the lowest vacation spending total of any state in the country. On the other end, Maryland, Washington DC and Virginia are known as wealthier states, so they have the resources to spend more on their vacations. Maryland, which spends the most on vacations in the region, spends a whopping 45.6% more than Mississippi per vacation.

For domestic trips, travelers from the South spend, on average, $138.34 on lodging. For international trips, the average spending is $633.25 on lodging. Lodging accounts for less proportional travel expenditure in the South than any other region. According to the BLS, the average price of housing in lodging in the south is lower than any other region, meaning hotels and Airbnbs are less expensive there than anywhere else. 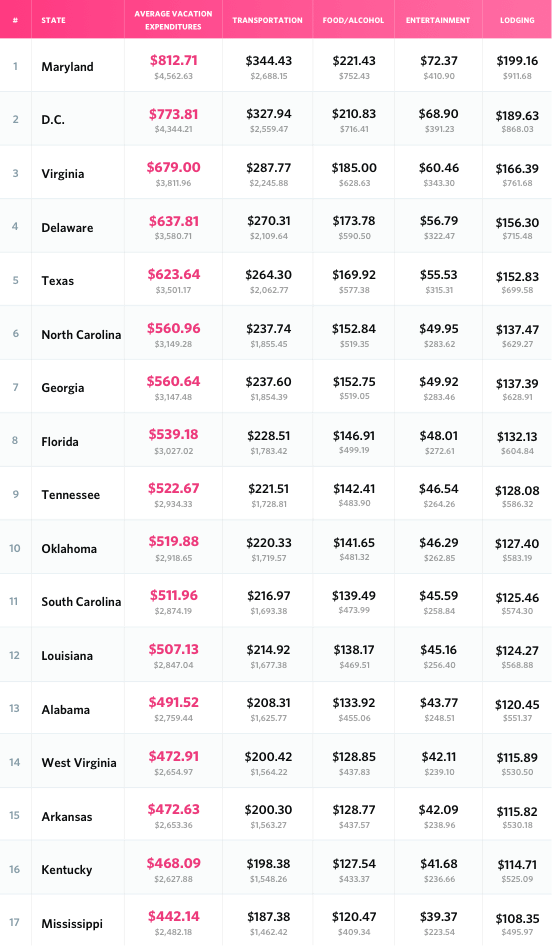 Alaska is a relative outlier in this category. With an average domestic trip cost of $851.21 and a foreign travel expenditure of $4,778.72, Alaska has by far the largest vacation spending totals of any state. Travel to any other state in the country is much further than any of the other states, and the airline infrastructure in Alaska is relatively under developed and is therefore more expensive. In general, this distance makes traveling an expensive endeavor for Alaskans.

On average, four day trips within the country cost Americans in the West region $677.78. International trips for travelers from the West, on average, cost $3,805.10. This is the second highest of any region in the country. People from the west have the second-highest income levels of any region and have the means to spend more on the more discretionary categories, like entertainment, which pushes up the West’s entertainment spending higher than any region. Additionally, entertainment costs in domestic-travel destinations and urban areas, like San Francisco and Los Angeles, are high, propping up entertainment costs.

Westerners spend an average of $183.31 on food & drink while on domestic trips. On international trips, they spend on average $622.88. Cuisine expenditure is relatively low in this region, as citizens of Western states tend to allocate more money toward entertainment, at the expense of food costs. 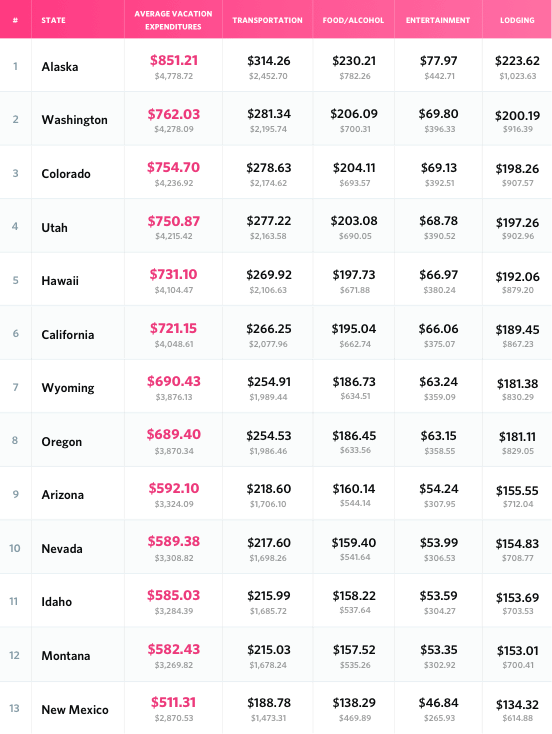 To determine how much, on average, residents of each state in the United States spend on vacation, RewardExpert used multiple data sources from the Bureau of Labor Statistics and the U.S. Census. We forecasted travel expenditures from a BLS report to 2015 using a dataset from the U.S. Census Bureau.

We determined what comprised of an average consumer’s vacation budget – Transportation, Food & Drink, Lodging, and Entertainment – via tables from a BLS report. We double checked the results by using variety of sources. We used hotels.com, gasbuddy.com, data sets from the Department of Transportation, regional and national bus and train websites to source fare information.