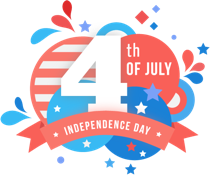 Flight delays, cancellations, and various disruptions are inevitable while traveling. However, for those flying for the Fourth of July this year, let’s take a look at the track record of some cities, airports, and carriers to determine the best route to your destination.

RewardExpert analyzed Department of Transportation flight data from the past five years to give travelers an idea of where the most delays have been reported and which airlines were responsible. This report examines the on-time performance of the top 10 domestic airlines at the 45 busiest airports in the U.S. over the Independence Day travel period. We also looked at the best and worst days to travel during the five days before and after the holiday.

Best and Worst Days to Travel Over Independence Day

RewardExpert examined DOT flight data during the 10 days surrounding Independence Day, plus the holiday itself, from the years 2011-2015 (latest available data) to assess which days during the travel period have the best on-time performance. While the day that the Fourth of July lands on differs each year, we analyzed on-time performance across July Fourths each year. We compared the dates, not the days of the week, and applied it to this year’s holiday period.

To catch the fireworks without any issues, flying out on the morning of the holiday itself is your best bet. There are far fewer delays, cancellations, or disruptions on the Fourth of July than the days before it.

According to our findings, there are, on average, 15% fewer flights on Independence Day than the day before it, so you might just be traveling without lines if you’re smart.

Thursday, the 6th is a great day to fly if you don’t mind a short trip. For those who want a little more time celebrating, Friday isn’t a bad travel day either. However, if you wait any longer, expect delays.

Avoid traveling on the Friday and Saturday before the holiday. These days, historically, have the most delays and cancellations. The same is true for the following Saturday. Travelers will try to return home to get an extra day before returning to work, but it’s best to leave earlier if you can.

RewardExpert analyzed DOT data to determine on-time performance of major U.S. airlines. This list displays the percentage of flights that were on time by airline during the Independence Day travel period.

Hawaiian Airlines was the best for on-time performance during the previous holidays. Its flights were on-time 94.7% of the time.

Budget carriers JetBlue and Southwest are two other airlines you should think twice about before booking. They both have less than 80% flights on-time.

The Busiest Airports over the Independence Day Travel Period

RewardExpert reviewed historical DOT data to determine the busiest airports over the Independence Day travel period. This list displays the yearly average number of arrival and departure flights during the travel period by domestic airports.

Hartsfield-Jackson is the busiest airport in the country over the holiday travel period. An average of 20,967 departures and arrivals go through the Atlanta airport during the holiday period per year. Despite the crowds, travelers will likely have a positive experience flying through Atlanta due to their solid on-time performance ranking during the Independence Day travel period.

Travelers visiting Chicago might want to consider Midway as their transit point instead of O’Hare. O’Hare is the second busiest airport during the travel period and the fourth most prone to delays or cancellations.

Third on our list of the busiest airports over Independence Day is Dallas/Fort Worth Airport. Dallas/Fort Worth also scored well in terms of on-time performance, which make it a great option for Texans flying out as long as they don’t mind the crowds. Dallas is busier than George Bush Airport in Houston, but Houston is more prone to delays according to our findings.

Dallas travellers might also notice that their other airport is getting busier. In the last five years, Love Field has increased the number of flights at an annualized rate of 8.4% - that’s higher than all the airports we examined by a margin of 4.8% more than the second place airport: Fort Lauderdale, clocking in at 3.6%.

RewardExpert analyzed DOT data to determine on-time performance by airport. This list displays the percentage of flights that were on time by airport during  the travel period.

Who wouldn’t love enjoying fireworks in Hawaii this year? If the islands are on your radar for the holiday, you’re in luck. Hawaii tops both lists; 88.5% of flights leaving Honolulu Airport are on-time in addition to being home to the top-performing airline.

Salt Lake City has the second best record for timely holiday flights. Those who live in the west can trust SLC to be an efficient hub to travel across the country.

Get ready if you’re traveling through the greater New York area because JFK, LaGuardia, and Newark all scored in the bottom ten. JFK, in particular, has the potential to be a nightmare this Independence Day. It has the fifth worst on-time performance record of the 45 airports we examined.

Washington D.C. area’s Dulles Airport scored worst overall as only 71.2% of flights were on-time. According to our findings, Dulles airport is also experiencing a reduction in the number of flights they have each year. In 2011 the airport had 4,218 flights during the Independence Day period. In 2015, this number dropped to 2,105, which is a whopping decline of 13.0% per year on average.

For those flying into northern California, consider flying into Oakland instead  of San Fransisco. The San Fran Airport is the third worst of all airports in regard to on-time performance, while Oakland is ranks 16th overall.

On-Time Evaluation: A flight is considered on time if it takes off or lands within 15 minutes after the scheduled time shown in the carriers' reservations system. The data assesses both arrivals and departures taking into account gate-to-takeoff times and landing-to-gate times.

Data Range: RewardExpert analyzed data from the 11 days surrounding Independence Day (the holiday itself +/-5 days) in the years 2011-2015.